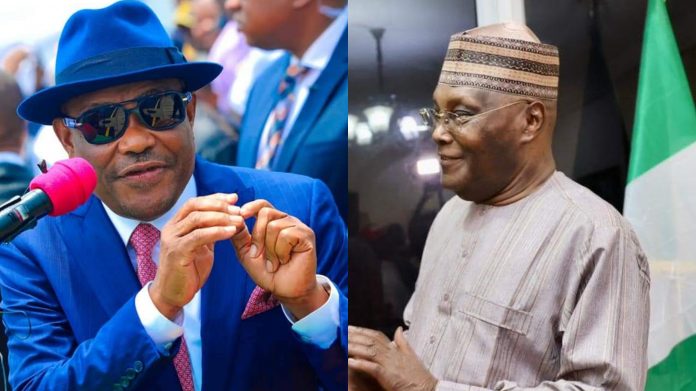 Governor Nyesom Wike of Rivers State says Atiku Abubakar, presidential candidate of the Peoples Democratic Party (PDP), forced Walid Jibrin, immediate past chairman of the Board of Trustees (BoT) of the opposition party to resign his position.

Mr Wike stated this on Thursday, lamenting that the leadership lopsidedness he complained about continued during the formation of the PDP Presidential Campaign Council which his group has now pulled out from days ago.

The Rivers helmsman and his allies have been at the forefront demanding the resignation of Iyorchia Ayu as the national chairman of the party. They are pressuring him to fulfill his promise of stepping aside should a fellow Northerner like himself emerge the flag-bearer of the PDP.

Mr Ayu who is currently outside the country has remained defiant, describing members of the aggrieved camp as children who were not born when the party was at its formation stage.

On Wednesday, the aggrieved politicians appointed into the campaign train of the former vice president popularly known as Atiku pulled out, insisting on the removal of the national chairman.

Mr Atiku swiftly responded that he cannot force Mr Ayu to resign, saying the party hierarchy – National Executive Council – that ought to oust him recently passed a vote of confidence on the National Working Committee (NWC) led by the embattled official.

Responding on Thursday during a meeting of PDP stakeholders in Port Harcourt, Mr Wike claimed Mr Jibrin was pressured by Atiku to step aside to assuage the aggrieved members.

“They are telling you they told the chairman of the BoT to resign. So you know there is a problem. You said he should go and resign,” he recounted. “You can put pressure on him (Jibrin) to resign when his tenure hasn’t come to an end, but you cannot put pressure on the chairman to resign. You think at our level you will deceive us; you’ll tell us stories.”

The governor also said the appointment of Governor Aminu Tambuwal of Sokoto State as the Director-General of the PDPPCC was a continuation of the lopsidedness in the party.

No plan to leave PDP

Mr Wike in a statement from Kelvin Ebiri, his spokesman, also dispelled rumors of him and his allies leaving the party, saying only weak men shy away from confrontations.

“One thing I have always told people is if anybody is thinking, doing anything to think that we will leave PDP, foul. We will do the fight in the party,” he was quoted as saying. “We are not like them, when in 2014 they walked out from Eagle Square. They’ve forgotten. They walked out and joined APC. Is it not correct?

“Did they remain to fight inside the party? But we remained; they ran away. Now, there is a fight in the party, we will not run. We will fight it in this party. Those who run away from fights are weak people. We will not. So, everybody should know this is the state where we are, so that nobody tells you all kind of stories.”