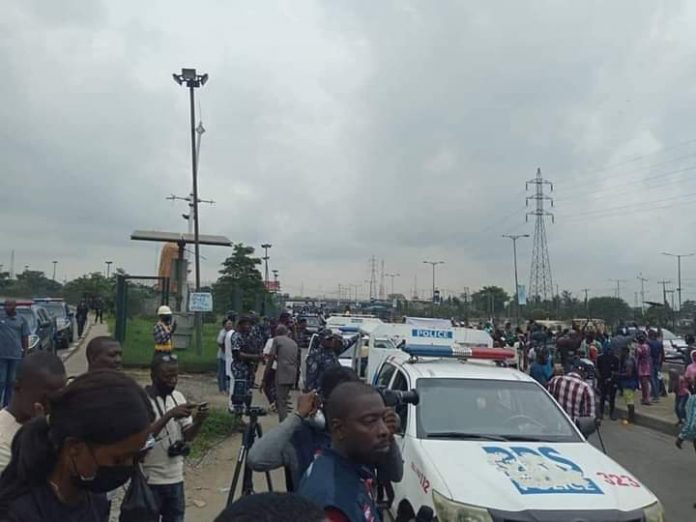 A 14-year-old female trader has been reported dead from alleged stray bullet of the police when officers clashed with Yoruba Nation agitators on Saturday.

The police had warned the agitators to steer clear from holding their planned rally in any part of the state. It threatened to deal ruthlessly with anyone found disturbing public peace but the warning did not deter the rabble-rousers demanding the breakaway of the South-West region.

They managed to staged the rally in Ojota area of the country’s commercial capital with multimedia reports showing the police chasing them and arresting those they could lay their hands on.

In a statement by its spokesperson, Olumuyiwa Adejobi, the Lagos State Police Command said investigation reveals that the deceased street trader was not killed by its personnel whom it said did not open live rounds.

“The Command did not fire a single live bullet at Ojota rally today,” Adejobi said. “The said corpse was found wrapped and abandoned at a distance, far from Ojota venue of the rally, behind MRS Filling Station, inward Maryland, on the other side of the venue, with dried blood stains suggesting that the corpse is not fresh.

“After a close look at the corpse, a wound suspectedly sustained from a sharp object was seen on it.

“The news is false and mischievous. The Command therefore urges the general public to disregard the news and go about their lawful normal daily activities while investigation to unravel the incident will commence immediately.

“The Commissioner of Police, Lagos State, CP Hakeem Odumosu, therefore commiserates with the family of the found deceased and assures that thorough investigation will be carried out,” the police assured.