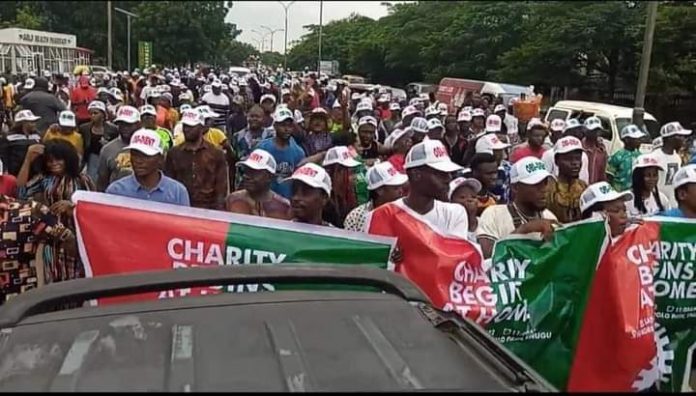 Boosters for former Anambra State Governor and Labour Party Presidential Candidate, Mr. Peter Obi on the 27th of August, 2022 as thousands of his supporters stormed streets of Enugu for a conference tagged “Charity Begins at Home” to register their solidarity for his Presidential ambition.

Prior to the conference, the mammoth crowd mostly youth which graced the conference held a procession from Okpara Square to the venue of the conference, shutting down major streets of Enugu in Labour Party colours and paraphernalias singing and dancing in praise of Mr. Peter Obi.

It was gathered from reliable source that the conference was championed by Capt. Evarest Nnaji (Odengene) led Enugu Peter Obi Support Group as a way of joining the other part of the Country where Nigerian youth has consistently and vigorously spoken with one voice that Peter obi is the competent hand for Nigeria Presidency.

Speaking with one of the participant, he said “we the Nigeria youth are out here to create awareness that Mr. Peter obi is our son and if there should be any support for him, it should begin here because charity begins at home”.

Recall that a similar march has been held in many States in Nigeria by patrotic Nigeria youth to signal their support for the Presidential Candidate of Labour Party. Mr. Peter Obi whom they believe has a genuine policy of recovery for Nigeria.

Judging from the faces of the youth, it is crystal clear that Nigerians are tired of cluelessness, hopelessness, incompetence and redundancy in her seat of power across the Nation and are ready to change the narrative in the forthcoming election.