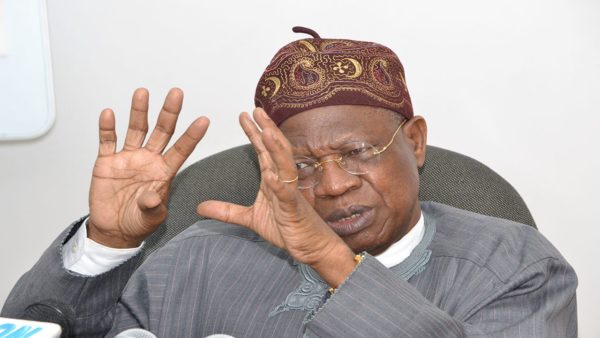 Facebook, social networking site, will be banned if the platform refuses to censor online activities of Indigenous People Of Biafra (IPOB) members, the federal government has hinted.

Speaking at the end of the weekly Federal Executive Council (FEC) meeting on Wednesday, Information Minister, Lai Mohammed, described the outcome of his meeting with a delegation from Facebook as encouraging.

The minister had summoned the social media site over the continuous use of its platform by members of the foremost separatist group to propagate their activities. Mr Mohammed said a situation where instigators of violence will be allowed to continue their online incitement was no longer acceptable.

The minister who said government officials would monitor the improvement which the delegation assured them of explained that the President Muhammadu Buhari administration currently has no reason to prohibit the use of Facebook in the country.

“We had a very robust discussion with Facebook,” the official said. “Facebook saw our point and they said they’re going to do much more than what they are doing.

“So if they do that, why would we ban them? We don’t ban for banning sake. We ban or we only suspend operations if for any reason, lives are threatened and they do not listen.”

Mr Mohammed said posts made by the IPOB supporters online usually result in the loss of lives and government properties.

“Over this weekend in Anambra State, policemen were killed, military barracks were attacked. And we did warn Facebook to please do more than what they are doing now. And I must say that their response was quite encouraging. They said they’re going to do much more.”

The government, which banned Twitter last year June, few days after the micro-blogging site deleted a tweet of Mr Buhari deemed genocidal, said it did so over separatist use of the platform but the move was generally perceived as a reaction to the bruised of the president’s ego.

Earlier in the year, it restored access to the micro-blogging platform many used Virtual Private Network (VPN) in circumventing the ban, claiming Twitter has accepted its terms and conditions, an action Nigerians said was because of the close electioneering season.