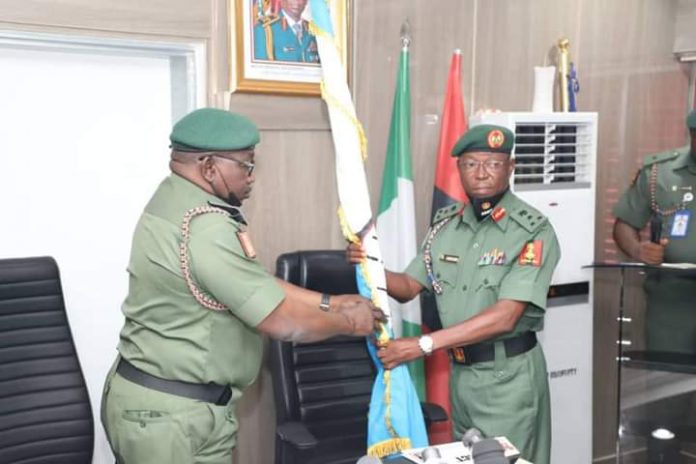 Newly appointed spokesperson of the army, Brigadier-General Onyema Nwachukwu, assumed office on Wednesday with a promise to ensure a better relationship with the media.

Mr Nwachukwu took over from the erstwhile director, Brigadier-General Mohammed Yerima, who had been in the saddle in the last four months.

He pledged to bring his experience to bear in projecting the activities of the Nigerian Army with the objective of galvanising public goodwill and support for its activities.

The newly appointed spokesman also pledged to partner with the media in achieving the objective of educating and informing the public, thereby bringing society up to speed on the happenings in the defence and security sector.

He urged the media to use their medium to positively shape public perception and opinion toward endearing national defence and security institutions to the public.

This, according to him, will enable the harnessing of requisite elements of national power to confront our common adversaries.

“It is an indisputable and very well established fact that the sword or gun cannot alone provide a panacea to the complex and multifaceted security challenges that characterise today’s world.

“I must, therefore, make haste to say that the complex nature of these security challenges requires a multi-disciplinary approach and a conglomerate of stakeholders of which the media is a very vital one.

“In decisively overcoming these challenges, the Nigerian Army and the media must be partners in progress to surmount these security threats in order to berth the peace and tranquillity we all earnestly desire as a people and nation,” he said.

He thanked the Chief of Defence Staff, General Lucky Irabor for the support given him as the acting director of Defence Information and the Chief of Army Staff, Major-General Faruk Yahaya, for giving him the opportunity to speak for the army.

Earlier, the outgone director, Mr Yerima said the Directorate of Army Public Relations under his watch had recorded commendable progress in the area of capacity building and logistics.

He commended the officers and soldiers of the directorate for their loyalty and support for him during his stint and urged them to extend the same to the new spokesperson.

He also appreciated the media for their cooperation.