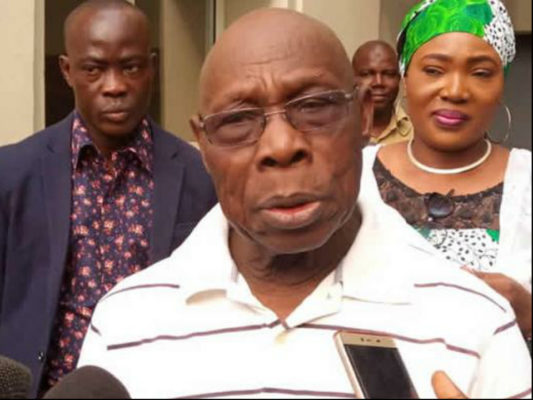 Former president Olusegun Obasanjo has described recent calls for the breakup of Nigeria as insensitive.

Mr Obasanjo, who stated this on Wednesday while playing host to the visiting Tiv Professional Group (TPG) in Abeokuta said those clamouring for breakaway of their region are planning to eliminate minority tribes within their geo-political zones.

Non-state actors like Sunday Adeyemo and Nnamdi Kanu have been spearheading calls for the splitting of the country.

While Mr Adeyemo popularly known as Sunday Igboho recently declared the breakaway of the Yoruba nation from Nigeria, Mr Kanu, leader of the Indigenous People Of Biafra (IPOB) is hell-bent on restoring the defunct Biafra Republic comprising of former Eastern region.

“If the Yoruba can stand as a country; if the Igbos and the Hausa/Fulani can stand as separate countries, where do we want the minority groups to be?” the former president said. “Now, by virtue of the present situation, they are a little bit protected. But if Nigeria breaks up, they will be oppressed and exterminated.”

The elder statesman stressed the need for Nigerian leaders to be mindful of the ethnic diversity of the nation, adding that the country will not make any meaningful progress without such consideration.

Mr Obasanjo, who expressed hope that the country’s mounting challenges under President Muhammadu Buhari’s regime would not last forever, urged Nigerians to be patient.