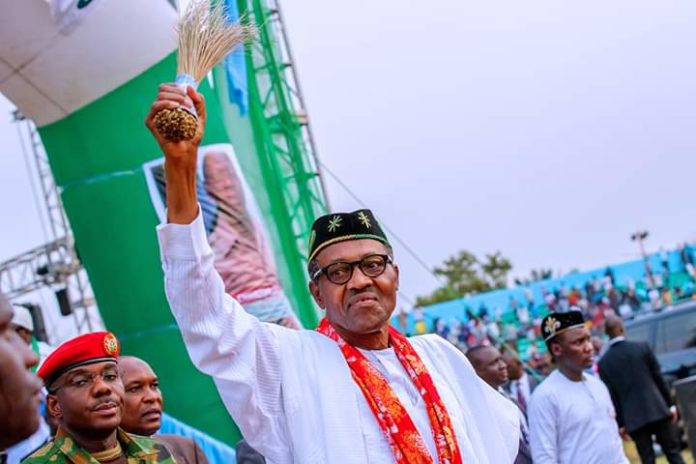 Mr Buhari since he started his presidential campaign has repeatedly been caught goofing.

The most recent is his latest proclamation of a gubernatorial candidate as the presidential candidate of the party in which he is seeking re-election on its platform.

While his campaign train stopped in Cross River State on Wednesday, the president after his speech at the event wrongfully lifted the hand of his aide, Senator Ndoma Egba, as the party’s flag-bearer in the March 2 governorship election.

Mr Egba is the president’s aide on national assembly matters and he is returning to the Senate on the platform of the ruling All Progressive Congress (APC).

“I don’t have much to say other than to thank you very much indeed and to present our governortorial candidate…,” Buhari said.

As he was still speaking the legislative aide drew close to him and had his hand raised up as the governortorial candidate of the party. Ndoma himself who never expected the endorsement on realising reminded the president that he is not the governorship candidate for the state.

He quickly referred the president by pointing at Owan Enoh, another federal lawmaker from the state who is the governorship candidate of the party in the state.

Mr Enoh was standing right beside the president when the hand of his colleague was lifted as the governorship candidate.

On realising, the president immediately turn to governorship candidate and raised his hand without handing over the party’s flag to him.

This is captured in a video trending on the social media. The clip seen by POLITICS TIMES showed the president seemed not to known the identity of the governorship candidate.