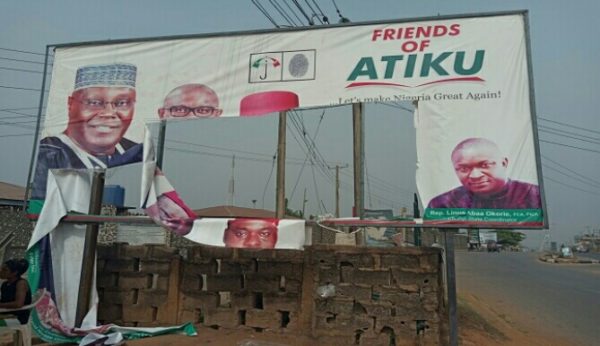 David Umahi, Ebonyi State Governor, has alleged that supporters of Atiku Abubakar, the 2019 presidential candidate of the Peoples Democratic Party (PDP), were behind the destruction of campaign billboard of the party in the state.

Mr Umahi who seeks a second term in office on the platform of the PDP said the damage done to presidential billboards in his domain were carried out by members of Friends of Atiku (FOA) campaign group.

The governor who said the state remained that of the PDP added that the group embarked on the mission because they were not getting the needed attention.

“I read on online about a support group that the bill board was been destroyed, and i know the character behind the installation of the billboard because he is not getting enough attention he has to destroy it to get necessary attention,” Umahi said on Tuesday while swearing in of some commissioner and Special Advisers at the Exco Chambers Government House Abakaliki.

“And for me it is ingenuity, I have told my people instead of sitting down and doing nothing, destroy something and start fixing it back. So the guy has no work,” he said.

The governor who described the state as the most peaceful and law abiding said the people are not known to destroy campaign billboards as anyone caught will face consequences.

“But if we catch anyone doing that, it is another problem,” Umahi said.