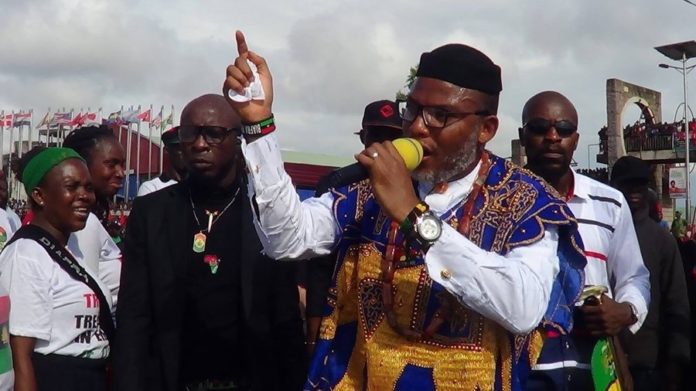 The embattled leader of the Indigenous People of Biafra (IPOB), Mazi Nnamdi Kanu, has commenced a Fundamental Right Action before the Federal High Court in Abuja, to demand payment of One Hundred Billion Naira (N100,000,000,000) as reparation for the gross violation of his Rights to Liberty and Dignity of Human Persons, by the Federal Government.

According to a statement by his legal team as led by Chief Mike Ozekhome, the IPOB leader is also seeking an immediate release from the “unlawful facility” of the Department of State Services (DSS).

The communique notes that this action was predicated by the continued grandstanding of the Federal Government of Nigeria to implement/carryout the Orders/Judgment of the Court of Appeal, delivered on the 13th day of October 2022, which in effect, discharged Mazi Nnamdi Kanu of the “frivolous” charge brought against him and consequently, prohibits the government from further detaining him, and/or subjecting him to further trial or prosecution by any court in Nigeria.

“It will be recalled that following the judgment of the Court of Appeal, delivered on the 13th day of October 2022, which in effect struck out the retained seven count charge hitherto pending against Mazi Nnamdi Kanu, there is no existing Order of a Court of Law, which presently sanction or legitimize the continued detention of Mazi Nnamdi Kanu, as all Courts of first instance in Nigeria has effectively, from this 13th day of October 2022, divested of all jurisdictional powers to either issue Orders in respect thereto or even undertake any further criminal trial/prosecution against Mazi Nnamdi Kanu.

“In the Originating Court Process, duly initiated on behalf of Mazi Nnamdi Kanu by our erudite Lead Counsel – Chief Dr. Mike Ozekhome, SAN, on the 21st day of October 2022, in Suit No. FHC/ABJ/CS/1945/2022 : BETWEEN MAZI NNAMDI KANU VS FEDERAL REPUBLIC OF NIGERIA & ORS, supported by six (6) paragraph affidavit, deposed to by Chimuanya Emenari Esq, a legal practitioner in the law firm of I. C. Ejiofor & Co., clearly verifying the facts of these gross violation of Mazi Nnamdi Kanu’s constitutionally guaranteed Rights, following his continued detention in a solitary confinement in the custody of the DSS in flagrant disobedience of Court Orders, Mazi Nnamdi Kanu is substantially seeking for the following Reliefs, anchored on the forgoing grounds, which the Reliefs are predicated upon to wit:

“A DECLARATION that the continued detention of the Applicant by the Respondents, from the 13th day of October 2022 till date, is illegal, unlawful, oppressive, unconscionable, and unconstitutional as it violates the Applicant’s Fundamental Rights to Dignity of Human Persons, Personal Liberty and Right to Freedom of Movement as guaranteed by Sections 34, 35, 36, 39, and 41 of the 1999 Constitution of the Federal Republic of Nigeria (As Amended) 2011.

“AN ORDER OF THIS HONOURABLE COURT directing the Respondents to unconditionally release the Applicant from their custody forthwith.

“AN ORDER OF INJUNCTION restraining the Respondents, their agents, privies, assigns or howsoever called, from further interfering with the Applicant’s rights, and/or dealing with the Applicant in a manner inimical to his Fundamental Rights guaranteed by the 1999 Constitution of the Federal Republic of Nigeria (As Amended) 2011.

“COMPENSATORY AND EXAMPLARY DAMAGES of N100,000,000,000.00 (One Hundred Billion Naira Only), against the Respondents for the gross violation of the Applicant’s fundamental rights to dignity of human person, personal liberty, and freedom of movement.

“AN ORDER OF THIS HONOURABLE COURT directing the Respondents to tender unreserved public apology to the Applicant in two National Dailies, and any other forms of reparation that the Honourable Court may deem fit to grant.

“AND FOR SUCH FURTHER ORDER(S) as this Honourable Court may deem fit to make in the circumstances.

“GROUNDS UPON WHICH THE RELIEFS ARE SOUGHT:

“By virtue of Section 46(1) of the 1999 Constitution of the Federal Republic of Nigeria (As Amended) 2011, and Order 1 Rule 2(1) of the Fundamental Rights (Enforcement Procedure) Rules, any person who alleges that any of the Provisions of Chapter 4 of the Constitution to which he is entitled to, has been, is being or likely to be contravened in any State in relation to him may apply to the High Court in the State for redress.

“The Applicant is entitled to his Fundamental Rights to Dignity of Human Person, Personal Liberty and Freedom of Movement guaranteed by Sections 34, 35 and 41 of the 1999 Constitution of the Federal Republic of Nigeria (As Amended) 2011,” the communique partly read.

Kanu’s legal team further argued that the continued and unlawful detention of their client whose health is daily deteriorating, from the 13th day of October 2022, till date, violates his “Fundamental Rights to Personal Liberty, Dignity of Human Person, and Freedom of Movement, and consequently, illegal and unconstitutional”.

“The Court of Appeal held that the Applicant is prohibited from being detained, tried, or otherwise dealt with in Nigeria, for/or in respect of any offence allegedly committed by him before his extraordinary rendition to Nigeria, thus, the continued detention by the Respondents, is arbitrary and unlawful.

“The Respondents have no authority or justification whatsoever, to detain the Applicant in complete defiance and disregard to the positive Order of the Court of Appeal, discharging the Applicant and barring the Respondents from detaining and/or prosecuting him.

“The Respondents cannot exercise their power outside the provision of the law and judicial pronouncements, and thus, they are bound to comply with the Order of the Court of Appeal, which discharged the Applicant.”

The communique from Kanu’s legal team further held that the applicant (Kanu) is constitutionally entitled under Section 35 subsection (6) of the 1999 Constitution of the Federal Republic of Nigeria (As Amended) 2011 to the payment of compensation and public apology from the Respondents for the gross violation of his Rights to Dignity of Human Person, Personal Liberty, and Freedom.