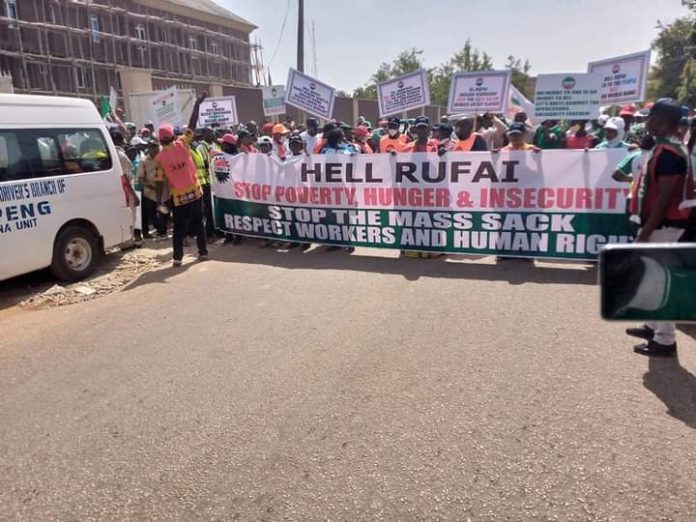 Governor Nasir El-rufai of Kaduna State has been nicknamed ‘Hell Rufai’ by the Nigeria Labour Congress (NLC) over his decision to sack some workers in the state.

The governor had last month stated that a significant amount of the statutory federal allocations it is receiving is being spent on the wages of public servants. According to him, the decision was one of the necessary moves to salvage the state’s finances.

“Therefore, the state government has no choice but to shed some weight and reduce the size of the public service. It is a painful but necessary step to take, for the sake of the majority of the people of this state,” the governor said in a statement.

“The public service of the state with less than 100,000 employees and their families cannot be consuming more than 90% of government resources, with little left to positively impact the lives of the more than 9 million that are not political appointees or civil servants.

“It is gross injustice for such a micro minority to consume the majority of the resources of the State,” he added.

The labour workforce, while protesting on Monday in the state, nicknamed the state’s helmsman in a banner they used in protesting against the decision of the Kaduna State government to sack some of its members employed in the state.

The banner had “HELL RUFAI” inscribed on it, advising the governor to stop poverty, hunger and insecurity ravaging the state.

He was also advised to stop the mass sack, respect workers and human rights.

The nickname is currently trending on Twitter Monday afternoon as at the time of filling this report.