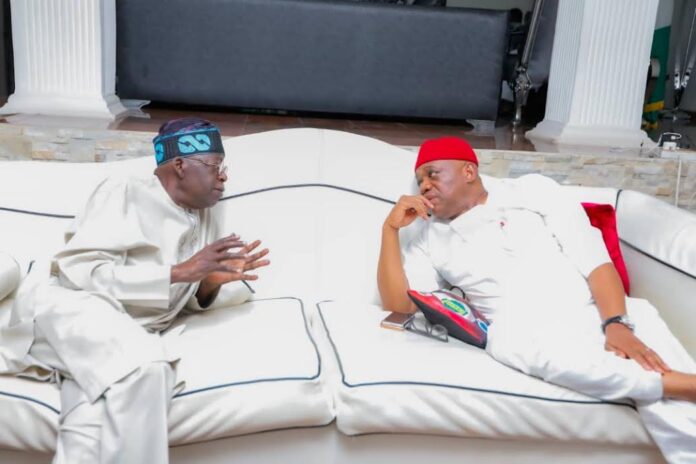 The duo are presidential hopefuls in the ruling All Progressive Congress (APC) and declared their interest in the race last week.

Mr Kalu, a former Abia governor was reported to have said he will wrestle for the party’s presidential ticket with the national leader of his party.

His comments were misconstrued to mean attacking Mr Tinubu, prompting a chieftain of the party, Nurain Mumuni, to attack the lawmaker representing Abia North at the Senate.

Mr Mumuni advised the senator to channels his war chest to the federal government and get Nnamdi Kanu, the detained leader of the Indigenous People Of Biafra (IPOB), released rather than attacking his rival who visited him November last year.

Clarifying his position in a statement on Sunday in Abuja, the former Abia helmsman explained that he has a firmly established relationship with the APC leader.

“I told Nigerians that I would contest against Tinubu if the ticket is zoned to the South,” Mr Kalu clarified. “APC is a democratic party that allows every qualified member to vote and be voted for. It is not owned or managed by an individual. If I said I was going to contest against Tinubu doesn’t mean I attacked him. I cannot attack him for any reason.

“It is said that few elements are trying to twist my statement to score cheap political goal. I am not distracted. My friendship with Tinubu is deep-rooted and I am not quarrelling with him. I am not against his ambition of becoming the president. It is the choice of the party to determine who becomes her presidential candidate,” he added.