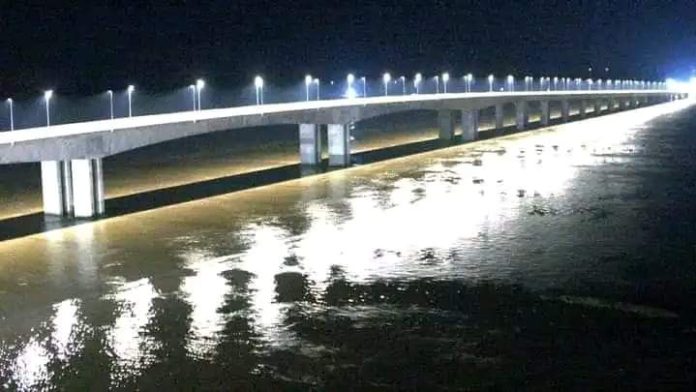 The bridge was opened at precisely 9:50 am.

The Federal Government had initially promised that the bridge will be opened at midnight.

The Minister of Works, Babatunde Fashola, had stated while inaugurating the Second Niger Bridge on Wednesday, December 14, that the bridge will be opened for one month during the Yuletide.

Fashola urged road users to drive safely and responsibly in order not to defeat the purpose of constructing the project.

He explained that part of the money used in constructing the bridge were stolen funds, mostly repatriated from the United States of America.

“Let me be clear again; we haven’t finished construction work on the bridge but we would open it for people to use to relieve the pressure from the one bridge. On January 15, 2023, we would reverse that movement for those coming from the East to the West,” the minister said.

The first driver to pass through the bridge, Sunday Emem, spoke to Channels Television.

“I feel so happy. At least it will reduce the hold-up. We’ve stayed over one hour at the other bridge,” he said.

The bridge was first proposed during the 1978/79 political campaign season by former President Shehu Shagari of the National Party of Nigeria (NPN).

In August 2012, the Federal Executive Council under former President Goodluck Jonathan approved a contract worth ₦325 million for the final planning and design of the bridge.

Construction of the bridge commenced on September 1, 2018.