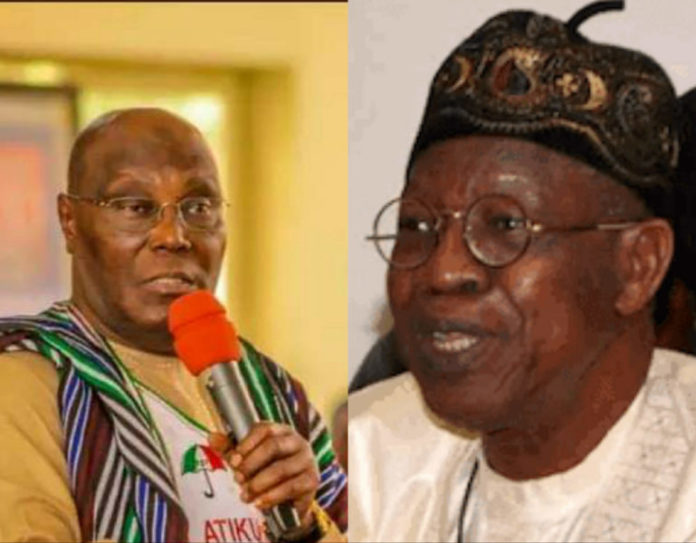 Atiku Abubakar, the 2019 presidential candidate of the Peoples Democratic Party (PDP) has told Lai Mohammed, Information Minister to stop lying against him.

Mr Mohammed had on Wednesday, after the weekly Federal Executive Council (FEC) meeting alleged that the former vice president and his party were hell bent on frustrating the administration of President Muhammadu Buhari.

But denying the allegation, the PDP candidate popularly known as Atiku said he was not surprised at the lies peddled against him since those who employed the minister know their employee as a liar.

“My attention has been drawn to accusations by the Muhammadu Buhari led administration against the candidate of the Presidential Peoples Democratic Party in the 2019 elections and former Vice President of Nigeria, Atiku Abubakar, alleging that he has made treasonable statements,” Paul Ibe, Media Adviser to Atiku said in a statement on Wednesday.

“It is not surprising that such a despicable lie is emanating from Mr. Lai Mohammed, President Buhari’s aptly named Minister of Information.

“Lai Mohammed is so associated with lies that even Vice President Yemi Osinbajo said, on Monday, May 13, 2019, as follows: “People like Lai Mohammed, Abba Kyari, Adamu Adamu they are usually very well behaved during the Ramadan. But I’m not even sure that that is true anymore.

“When we have a situation where even those who employed him know that Lai Mohammed is a liar, who will even lie during the holy month of Ramadan, then why should Nigerians be surprised at this latest lie?

“Mr Lai Mohammed is only being clever by half when he says “It beggars belief that a candidate who prides himself as a democrat can so allow desperation to becloud his sense of propriety to such an extent that he will be associating with anti-democratic forces or making inflammatory statements.

“Atiku Abubakar is a man of peace and a thoroughbred democrat. It is preposterous that those who threatened to ‘soak the dog and the baboon in blood’ are now audacious enough to point the finger at lifelong democrats. Truly, if the farmer does not raise the alarm on time, the thief will accuse him of being a thief,” Mr Ibe said.

The spokesman queried why President Buhari wants to replay the Phantom plot saga of his now deceased mentor, who threw former President Olusegun Obasanjo in jail after falsely accusing him of treason in order to perpetuate himself in power.

“Could it be that they are now aware that the electoral fraud they perpetrated during the last Presidential election is about to be exposed beyond a shadow of a doubt?

“If anybody is “beating the drums of war”, it is precisely those who have issued statements threatening Nigerians and foreigners alike with “body bags”.

“For the avoidance of doubt, let me inform the minister of disinformation that Atiku Abubakar resisted the Abacha dictatorship, of which President Muhammadu Buhari was a prominent member, and it is his resistance and the sacrifice of his co-travellers, like chief MKO Abiola and Alex Ekwueme, amongst others, that gave rise to the democracy that the current government is now trampling on.”

Ibe advised the minister to face the cesspool of corruption that has been exposed in his ministry by the investigative website, Premium Times, “which revealed that Mr. Mohammed’s fingers may be stickier than sticky glue.”