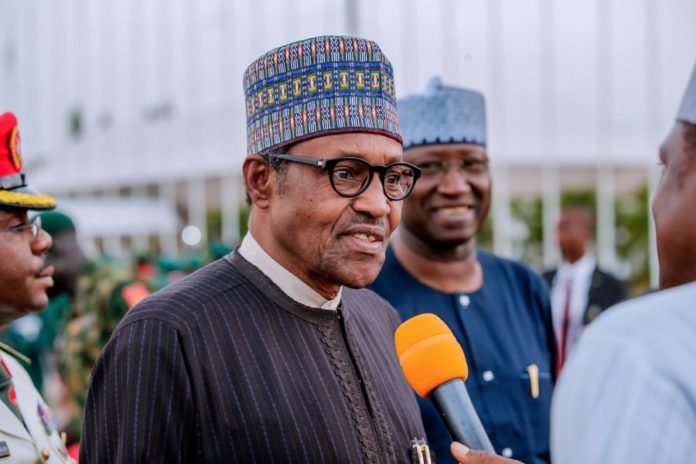 The administration of President Muhammadu Buhari has reportedly offered to appease armed bandits who have wrecked havoc in Northern parts of Nigeria with a N100 Billion compensation.

The report has drawn a reaction from Human Rights Writers Association of Nigeria (HURIWA), who kicked against the plan.

The reaction of the group is contained in a statement published on Daily Post on Sunday. It noted that the compensation is a fall out of a meeting between delegations of the Federal Government and leadership of Miyetti Allah Cattle Breeders Association of Nigeria (MACBAN).

The cattle breading body were said to have demanded N160 Billion compensation or they will continue with their atrocities.

They were said to have accepted the N100Billion compensation from the delegation of the Federal Government after the latter pleaded with them.

Cases of insecurity has risen in some Northern States. Zamfara and Kaduna are top states where high rate of Crimes are reported on daily basis.

HURIWA said the planned appeasement is an impeachable offense and not known to the Nigerian Constitution as the only possible reason the current administration could enter into dialogue with armed bandits is “because the offenders share the same Ethno-religious affiliations with the holders of the top security portfolios who make up the exclusive Hausa/Fulani dominated Internal Security architecture.”

“The members of the current national security team made up of mostly one Ethnicity and persons of one Religious affiliations same with the armed fulani herdsmen and bandits have always made decisions that reflects their biasness and inclination to pamper and protect these armed bandits who ought to be dealt a heavy blow in line with the constitutional provisions,” the group said.

“The other time the minister of Defence who is from Zamfara state was the person who rather than condemn and order the arrest and prosecution of armed fulani herdsmen unleashing mayhem and violence in Benue state was the one who tried to provide some kind of justification for these dare devil blood cuddling attacks on Benue communities by blaming the properly passed state legislation banning open grazing of cattle which has been at the core of much of the bloodshed.

“The minister of interior who is Fulani Moslem has on many occasions belittled the gravity of the armed fulani violent attacks and dismissed it not as a terror campaign but as a mere law and order issue which the police can handle.

“These members of the internal security team including Mr President have openly made statements that are obviously ambiguous and have failed to decisively treat these attacks by armed bandits and armed fulani attacks as a major national security challenge.

“This is why there is the urgency of the now for President Buhari to obey the constitution and appoint persons of diverse Ethno religious affiliations to make up the national security team and professionally and clinically tackle the rising waves of insecurity and national paralysis.

“As a group of committed patriots, we are shocked to read that this government has entered into a communion of the devil with the armed bandits and armed fulani herdsmen who have wreaked havoc and unleashed devastation across many communities in Nigeria.

“Why do we have laws and why do we have institutions of law enforcement? This shameful piece of bad news of seeking to bribe outlaws and terrorists by this government must be seen for what it is. It is treason that must be seen as an immediate impeachable offence.

“All those who communicated with bandits and outlaws must be arrested and prosecuted for high treason because the laws must not be a respecter of any person,” it added.