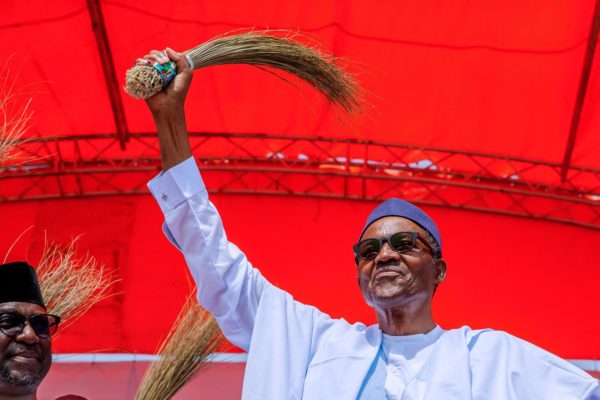 Mr President is quoted as making the above statement on Saturday when he visited traditional rulers in the state seeking their endorsement for his re-election.

The governorship election conducted by the Independent National Electoral Commission (INEC) in September was won by the APC although the Peoples Democratic Party (PDP) took early lead.

A rerun election which was later conducted in the areas believed to be the stronghold of Senator Iyiola Omisore, the governorship candidate of the Social Democratic Party (SDP) saw the ruling party leading the opposition party.

Mr Omisore, POLITICS TIMES recalls, had entered into alliance with the APC to deliver his stronghold to the party. This was after he met a delegation of the PDP seeking similar help from him.

“I know how much trouble we had in the last election here,” Buhari was quoted by TheGuardian as saying while addressing the traditional rulers at the banquet hall of Osun State Government House.

“I know by remote control through so many sources how we managed to maintain the party (APC) in power in this state,” he added.

The president at the meeting did not elucidate clearly what he meant by remote control.

The monarchs were led by the Ooni of Ife, Oba Adeyeye Enitan.

Since the start of his campaign, Buhari has been caught severally goofing at campaign ground.