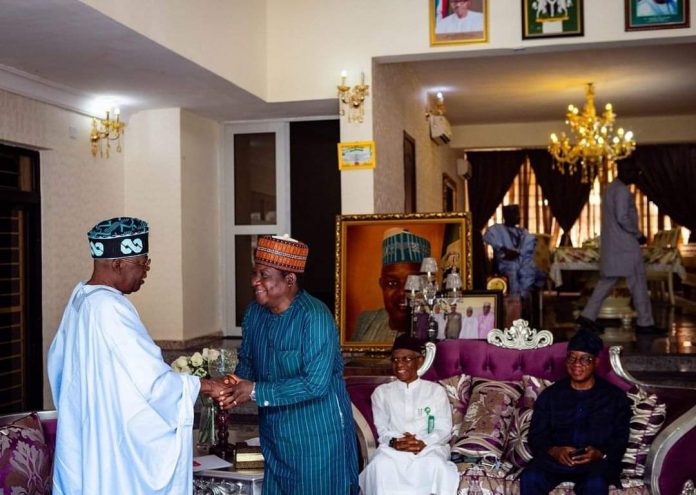 Bola Tinubu, presidential aspirant and former Lagos governor, says he met with state governors of the All Progressive Congress (APC) to seek their support.

“My mission here is to seek collaboration, support, and encouragement of my party, the APC, for my ambition to become the president of the Federal Republic of Nigeria as a replacement for President Muhammadu Buhari after his tenure,” he said while addressing newsmen.

The APC chieftain met with the governors Monday morning, hours after his rival, Vice President Yemi Osinbajo, met with the states helmsmen before officially declaring his ambition to succeed his principal, President Muhammadu Buhari.

The governors in attendance during the meeting which held at the the Kebbi State Governor’s Lodge, Asokoro, Abuja, include Governors Abubakar Bagudu of Kebbi State, Nasir El-Rufai of Kaduna State, Bababjide Sanwo-Olu of Lagos, Abdullahi Ganduje of Kano, Gboyega Oyetola of Osun, Mai Mala Binu of Yobe, Simon Lalong of Plateau, Abubakar Badaru of Jigawa, amongst others

Mr Osinbajo who served as his attorney-general when he held sway in Lagos before being recommended to deputise the president during the 2015 election, will have to fight with his benefactor for the ticket of the ruling party.

Aside Tinubu, the Vice President has other aspirants like Governors Dave Umahi and Yahaya Bello of Ebonyi and Kogi states respectively to contend with.

He will also wrestle with Senators Orji Kalu and Rochas Okorocha, Transportation Minister Rotimi Amaechi for the ticket of the ruling party.

Already, the number two citizen has been advised to withdraw from the race and respect his former boss.