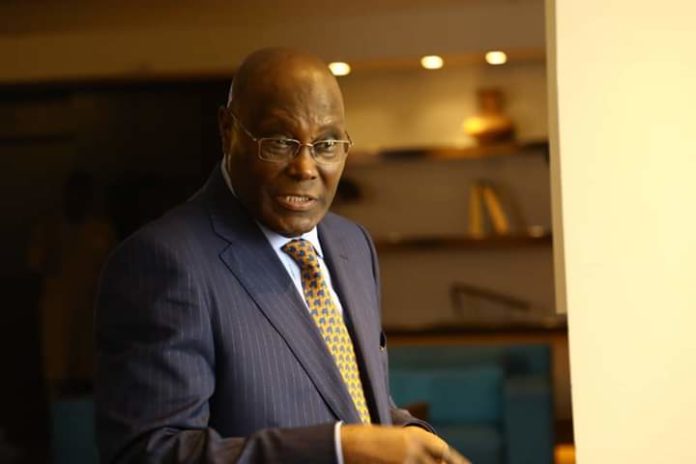 Former Speaker of the House of Representatives, Yakubu Dogara, and other aggrieved Northern All Progressives Congress (APC) leaders, have adopted the presidential candidate of the Peoples Democratic Party (PDP), Atiku Abubakar, for the 2023 election.

The leaders, made up of Northern Christian leaders in the APC and other stakeholders, said the PDP candidate was adopted following the resolve of the leaders to work with their Muslim counterparts in the North to defeat the same-faith presidential ticket of the APC.

Recall that Dogara and former Secretary to the Government of the Federation (SGF), Babachir Lawal, and some aggrieved Northern APC Christian leaders, had reject the Muslim-Muslim ticket of the APC.

While Lawal, who had been a member of the group subsequently endorsed the Labour Party (LP) presidential candidate, Peter Obi and his running mate, Yusuf Datti Baba-Ahmed, Dogara and other members of the group distanced themselves from the endorsement, saying they were yet to conclude consultations and that their position would be made public.

The report was signed by the Chairman and Secretary of the Committee and former Minority Leader of the House of Representatives, Mohammed Kumalia and Mela Nunge.

According to Achuba, the candidates evaluated were Atiku, Bola Tinubu of APC, Obi and Rabiu Kwankwaso of the New Nigeria Peoples Party (NNPP).

He said the leaders took consideration of existing structure of the party, capacity of the candidates, evidence of national penetration, religious and ethnic balance, among others, to arrive at the decision.

He said it was observed that the APC and PDP were almost at par in terms of political structure, noting that the compounding albatross on the neck of APC was the “unfortunate self-inflicted divisive same-faith-ticket, which cannot guarantee the desired peace, unity and cohesion in Nigeria, a decision that has been kicked against by a huge population of Nigerians.”

He observed that while the duo of NNPP and LP might emerge as strong contenders in the political arena in the future, from all indications, PDP appears to be the best option to adopt and support.

He said: “The seven and a half years of the APC government has engendered widespread national perception of its inability to tackle security challenges and turn around the national economy.

“A further compounding albatross on its neck is the unfortunate self-inflicted divisive same-faith-ticket which cannot guarantee the desired peace, unity and cohesion in Nigeria, a decision that has been kicked against by a huge population of Nigerians.

“The perception that the APC presidential candidate has some health challenges makes people very uncomfortable. There is the fear that it may precipitate a situation where unelected surrogates will be running the government while the president left to attend to his health.

“On account of one to four above, the party is likely to face a backlash or may not escape a backlash that will lead to its defeat at the polls in 2023.

“From the existing structure of the Labour Party and even from the records of Independent National Electoral Commission (INEC) as it stands for 2023 elections, even if all their candidates win in the 2023 elections, can the party still produce the president? Very unlikely indeed!

“Assuming without conceding that they even produce the president, can they (LP) run the government? Not likely.

“The results of five and six above will be to form a minority government with devastating effect on national political stability further impelling the fragile health of our country.

“Furthermore, there is no way a keen political observer will not see that there is a major disconnect between Peter Obi as a candidate and Labour, which is indicative of the fact that he is not running a collegial political structure in a diverse country like Nigeria.

“It is, however, respectively observed that LP is a party to be watched in the future only if it sustains the tempo and maintains the mass movement while at the same time building up its structures towards subsequent elections.

“The NNPP on the other hand has similar characteristics with the LP and there is no need repeating same except that NNPP appears to be building a party for the future with little or no impact in the 2023 elections.”

The leaders, therefore said, “after a careful evaluation of all the issues highlighted above, we hereby recommend for the adoption of the PDP, to all lovers of democracy in Nigeria, for the 2023 presidential election.”

They, however, noted that “this should be subject to getting the necessary assurance from the party to run an all-inclusive government, details of which shall be discussed with the leadership of the party in the nearest future.”

Earlier, Dogara argued said he would not have backed a Christian-Christian ticket if it were the case, adding that all Nigerians must be given a sense of belonging.