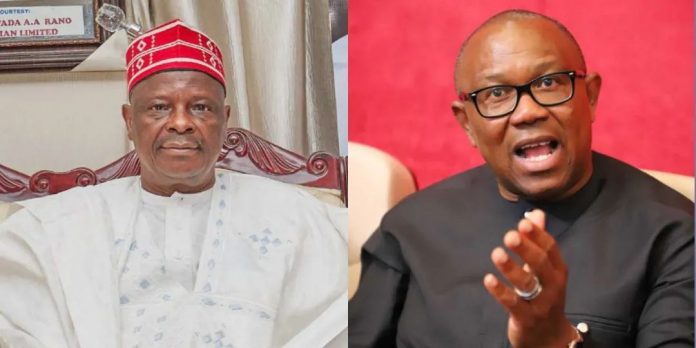 Peter Obi, the presidential candidate of the Labour Party (LP) has replied Rabiu Kwankwaso, the flag-bearer of the New Nigeria Peoples Party (NNPP) over a recent remark the latter made about his political ambition of succeeding President Muhammadu Buhari in office.

Messrs Obi and Kwankwaso were reportedly working on forming an alliance that will oust the ruling All Progressive Congress (APC) from power during next year’s presidential election.

The coalition talks between the two opposition party collapsed over who should become the presidential candidate, with the duo unwilling to step down for the other.

While the LP and its candidate moved on, searching for another replacement of its vice presidential placeholder position, Mr Kwankwaso granted an interview on Sunday, saying his rival was better off as his running mate.

He said the former Anambra governor has slimmer chances of becoming president due to secessionist agitations ongoing in the South-East geo-political zone which most of his kinsmen are uncomfortable with.

The former Kano governor whose North-West region is being bedeviled by rising banditry said the Igbo predominant region has a “golden opportunity” to be relevant in the country’s political sphere by aligning with his party.

Responding to his outburst, Mr Obi said the remarks of his rival was why the country has millions of out-of-school children while others wrestle with poverty and unemployment.

“It is the reason why we have all the problems, why Nigeria is insecure because rather than vote for competence, we choose to vote for incompetence based a primitive consideration of ethnicity and religion.

“Yesterday we had an attacks by bandits on the presidential convoy in Katsina, is it because the person from South-East is in charge? Mr Obi queried.

The LP candidate is expected to name his running mate on or before Friday, according to the placeholder, Doyin Okupe.

“I prefer younger people who have a lot to offer rather than (sic) recycling old hands,” he retorted. “I want a competent person, and I am building a formidable team.”

Mr Obi will be 62 on July 19. Rabiu Kwankwaso, the presidential candidate of the New Nigeria People’s Party, will be 66 on October 21.

Senator Baba-Ahmed not yet running mate

He also dismissed insinuations that the spokesperson of the Northern Elders Forum (NEF), Hakeem Baba-Ahmed who will turn 67 by September, was his running mate.

“We are talking to quite a number of people, and Hakeem Baba-Ahmed is a capable hand. But I wish I can work with somebody who is younger,” he stated.

“I want people who can look me in the eye and disagree with me during cabinet meetings. People who have their own minds and ideas.”

Mr Obi has upto July 15 to substitute Mr Okupe named as a placeholder for the vice presidential candidate of the opposition party.