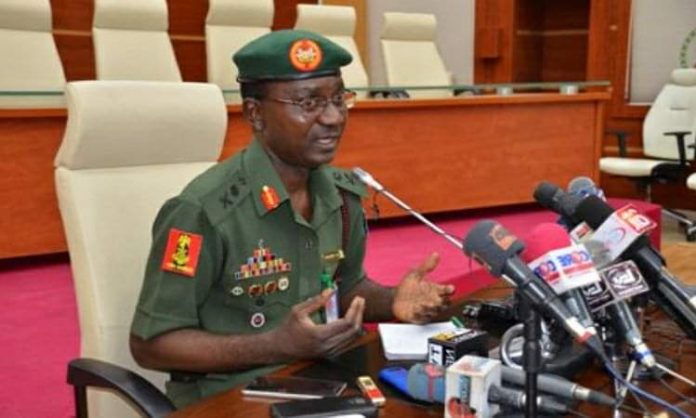 In 2020, TODAY POLITICS, recalls that youths in the country began protesting, demanding the scrapping of then police brutal unit codenamed Special Anti-Robbery Squad (SARS). They hinged their decision on the incessant harassment, torture and killing of young Nigerians who appear wealthy physically.

The protests across several states went on for weeks until military personnel swooped on demonstrators at the Lekki tollgate in Lagos, opening live rounds on the protesters on October 20.

Authorities, including the Lagos State government, began denying dispatching troops to the scene of the massacre the federal government later described as “massacre without bodies.”

Mr Eneche, on his part as a military spokesman, described multimedia reports of the development as photoshopped with no truth therein.

Recently, he was appointed a member of the Obi-Datti Presidential Campaign Council (PCC) of the Labour Party LP). His appointment met strife criticism when OBIdients – A youth driven movement supporting the Anambra former governor – called for his exclusion from the 1,234-member list of the PCC.

Explaining his reason for the description, the Major General in a statement on Friday said he worked based on his oath of allegiance.

“Dear countrymen and women, following my appointment on the campaign council of Labour Party, there were reactions on the social media about my pronouncement concerning a video shot at the scene of the ENDARS incident at Lekki toll gate on 20 October 2020,” the statement partly reads.

“Every one that commented in any way was right based on the information at their disposal and individual analysis. Personally, and professionally, I worked with the overriding interest of Nigerians at heart based on the oath of allegiance I swore on commission into military service which is sacrosanct.

“I sincerely shared in the pains of that breaking news through the social media as it were. On this note, I want to assure all that more effort will be put in, so that all assertions can be cleared convincingly from appropriate sources,” he pledged.

Meanwhile, following the outcry that greeted his inclusion, Mr Obi has indicated that the ex-military spokesman, might not make the list where he said errors were made.

“I’ve received several calls of concern following the release of the Labour Party’s Presidential Campaign Council list,” the LP candidate tweeted on Friday. “Admittedly, there were some omissions and erroneous entries in the list, hence the concerns expressed. In response, the Labour Party Chairman in the presence of members of the NWC addressed the issues during a press conference. In keeping with our commitment to accountability, responsiveness and transparency, an updated list will be issued in due course. I plead for patience.”