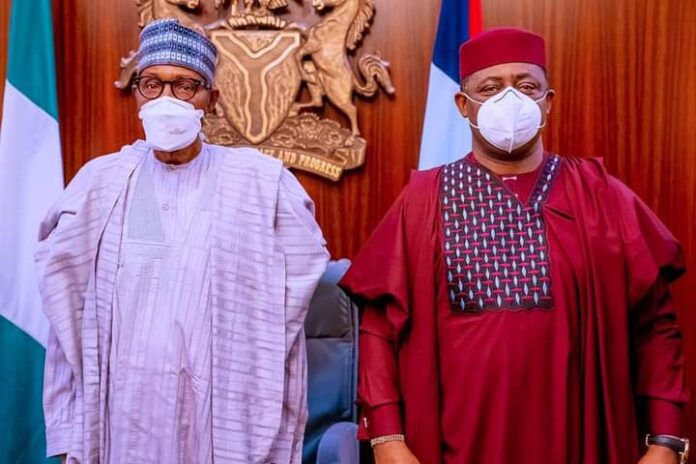 One of the most embarrassing events of last week in Nigeria was the photo opps the President Muhammadu Buhari and former Minister of Aviation, Chief Femi Fani-Kayode, had. Buhari had hosted Fani-Kayode in Aso Rock, the seat of power, as a way to welcome him back into the ruling All Progressives Congress.

A critical analysis of the issue shows that the embarrassment from the photo opps came from Buhari instead of Fani-Kayode. The photos did not portray Buhari as a man with a full understanding of his self-worth, accentuated by the position he occupies. Contrarily, the photos gave him the image of a man who would go to any length for conquest and power.

A Nigerian politician leaving one party for another is no news. Given the things Fani-Kayode had said against the APC in the past, his return to the party could have been somewhat surprising but not shocking. It would not have made any serious columnist dedicate a column to it, given the pedigree of Fani-Kayode for the bizarre and the unpredictable.

Many people have criticised Fani-Kayode for lacking in principles by returning to his vomit, sort of. For example, in 2015, he posted on his verified Twitter handle: “I am not surprised that @MObanikoro and @iyiomisore have got their passports back from the EFCC and are now in America. I do not blame them for joining the ruling party to avoid persecution. Some are strong whilst others are weak. I would rather die than join APC or bow to Buhari.”

He served as a presidential spokesman and later as a minister under the Peoples Democratic Party government led by Chief Olusegun Obasanjo. He was known to be an attack dog for that administration. He left the PDP for the APC while Dr Goodluck Jonathan was President. He then returned to the PDP just before the 2015 elections, claiming that the APC was an “evil party” that did not mean well for Nigerians, especially Christians. While in the PDP, he said unprintable things against Buhari and his Fulani ethnic group, and the APC. No politician has called another party names like Fani-Kayode called the APC and Buhari. Then, last week, he returned to the same the APC.

Nobody knows the type of discussions that went behind the scene before he returned to the APC. About his returning to the ruling party, Fani-Kayode said: “Joining APC now is the way forward, despite what people may think about it. APC is a liberal party. A lot has happened in APC over the years. The party has changed and the President has accommodated the change. Had the APC leadership not changed, I wouldn’t have joined them. I am doing the right thing based on conviction and understanding. This is the right decision for me. Love me or hate me, it will not take anything away from me.”

Although the words of Fani-Kayode against Buhari and the APC may have been beyond even the worst standards in politics, his jumping from one party to the other is not peculiar to him. Many Nigerian politicians have jumped repeatedly from one party to another after saying negative things against such parties or individuals. That is why in the Nigerian lingo, such politicians are referred to as “food-is-ready politicians” or AGIP (Any Government in Power).

However, the news in the whole saga is that Fani-Kayode was welcomed back into the APC by no other person but President Buhari right inside the presidential villa and later posed for photographs with him. What was the rationale for such a presidential welcome? Buhari does not have any constitutional right to contest in the next presidential election. Fani-Kayode does not have any known electoral value that can help the APC do better at the polls. What he has is nuisance value, but even that is not an asset anymore because of his flip-flops, which have made many people no longer pay attention to his words. The only good thing his leaving the PDP for the APC would do for the latter is that the number of irritants against the APC has reduced by one.

The best the APC should have done for him was for the chairman of the party to welcome him at the party’s secretariat with some of his officers. Buhari as the President should have had nothing to do with it. He should not have received him in the presidential villa or taken photographs with him. Even for any far-fetched reason he had chosen to receive him in Aso Rock, no photographs should have been taken with him or allowed to be released to the public.

The office of the President of Nigeria is an exalted one. Sadly, Buhari does not seem to understand the magnitude and stature of that office. If he did, he would be careful about some of his actions and words.

In this defection, Fani-Kayode has not lost anything despite going back on all he said. He has not lost his integrity, for he has never pretended to be a merchant of integrity in Nigerian politics. It is the office of the president occupied by Buhari that has been belittled.

Usually, when a politician defects, the party that has gained the new member celebrates, while the party that lost sulks. In the case of Fani-Kayode, it was not so. Rather than the PDP lamenting about his exit, it was the APC members that have been lamenting his entry and the red-carpet reception he was given, especially by the President.

For example, in a news report by The Cable, with the headline “APC members angry about Fani-Kayode’s defection, says Salihu”, the director-general of the Progressive Governors Forum, Mr Salihu Lukman, tried to explain why some APC members were against the defection of Fani-Kayode.

In the press statement Lukman issued over the weekend, he noted that the APC members were shocked by the high-level reception given to Fani-Kayode. Lukman said inter alia: “The protest against Fani-Kayode joining the APC has to do with his venomous nature. He abuses, insults, and disparages everybody, almost indiscriminately.

“Almost every member of the APC is angry that our leaders have brought someone like Fani-Kayode into our party. This is made worse by the red-carpet reception given to him, which he doesn’t deserve.

“But since it has happened, there is no need to cry over spilled milk. What is very clear is that our leaders, especially President Buhari, have forgiven Fani-Kayode and embraced him as one of us.

“Contrastingly, those who are consistent and loyal to our party and our leaders hardly gained the deserved respect they should have. This may not necessarily be intended, but it is there. Be that as it may, members need to move forward with every confidence and commitment to engage our leaders.”

One could see that Lukman was trying hard to sound like a good party man rather than fuel the discontent among the APC members. But it was apparent in his statement that the type of welcome given to Fani-Kayode was not only undeserving but also in bad taste to most party members. Some of them had complained that many of them who had been loyal and diligent in their service to the APC had not even been given any form of appreciation, not to talk of recognition.

One does not know if Buhari acts based on advice or based on what he wants before he takes certain actions. If someone had advised him to officially receive Fani-Kayode, it was a terrible piece of advice. If he had chosen to do so himself without being advised by anybody, it was a terrible error of judgment.