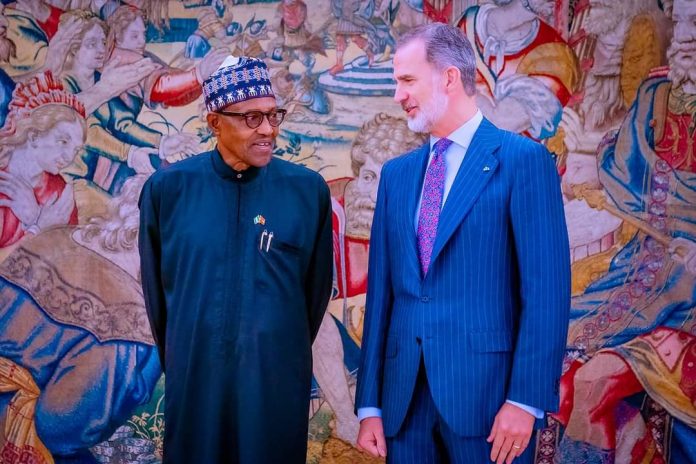 And you see people huffing and puffing as they dance to it, with their shoulders raised in pride, bordering on arrogance. That sent me searching for the meaning of the word ‘buga.’ And I found it. “To flaunt one’s effort, success or achievement.” And why not? That is not arrogance. It is even celebratory, with a tinge of thanksgiving.

And having been with President Muhammadu Buhari in Madrid, Spain, since Tuesday, I decided to use the headline above, with due credit to Kizz Daniel and Tekno.

Why should we ‘buga’ for Mr President? I will tell you the story shortly. Let’s reverse a bit to Tuesday, and the meeting he held with the Progressives Governors’ Forum before we left Abuja.

President Buhari told them of what he would like to see at the All Progressives Congress (APC) primary to elect a presidential candidate early next week. No word about zoning, consensus, or imposition of candidate. He just charged them to let their plans converge, so that the party would put its best foot forward. Shortly after the meeting, we headed for the airport.

A short time into the about five hours flight, I went on social media, to see that all hell had broken loose. Trust some Nigerians. When there’s no controversy, they simply create one. They will die of boredom if they don’t have something to wail or ululate about.

What were they bellyaching on? Oh, he used the words ‘my successor,’ instead of ‘APC candidate.’ That means he wants to rig the election. Otiose.

Oh, he talked about Governors who performed well being given opportunity to get a second term, for continuity. That means he wants to impose someone from within the government to succeed him. Consensus is what he wants. Puerile.

Is consensus not one of the acceptable ways of choosing candidates, according to the Electoral Act? So the party can jolly well decide on the method it wants.

Oh, he didn’t talk about zoning. APC wants to give its ticket to the North. Really? Did you see anything like that in the speech?

I tell you. When some Nigerians don’t see what they expect in a speech or statement, they simply conjure and create their own. And the wailing starts.

We arrived Madrid in the night. Hala Madrid! Home of the conqueror of Europe in football, Real Madrid, which just beat Liverpool to the diadem a few days before. Is the city still celebrating?

Madrid is beautiful, no doubt about it. And seeing the city at night gives it an ethereal ambience. Lovely, very lovely.

Driver of the car in which I rode with a colleague told us we were going to the best hotel in the city. And why not? We were guests of the Spanish President, Pedro Sanchez. President Buhari was also to be hosted by the King of Spain, His Majesty King Felipe V1. Honors don’t come higher than that.

Our first port of call on Wednesday was United Nations World Tourism Organization (UNWTO). Nigeria would be hosting the body in November, and our President is said to be the second African ever to visit the place. The Secretary-General, Zurab Pololikashvili, had very good words to say about our country.

Next was the Zarzuela Palace, to meet with His Majesty, King Filipe. The kiln of patriotism could not but be kindled in your heart as you see the tall Fulani man from Daura being welcomed by an equally tall King. Back home, some people call him all sorts of names, out of malice and evil hearts, but here was the man flying the flag of his country proudly, meeting those who matter, and making conquests.

During lunch, I sat at table with some aides of the Spanish President, diplomats and Protocol officials. We initially talked about soccer, the Real Madrid UCL victory, and Nigerians making waves in Spanish soccer. There are 19 males and 7 females currently there.

One of our hosts asked about a former Nigerian footballer, who had shone like a star in Spain. Mutiu Adepoju.

“The Headmaster!” I exclaimed. The guy concurred, saying Adepoju scored many goals with the head while playing in Spain. He couldn’t stop talking about him.

And then, the talk shifted to our President. One of our hosts said he was a man of integrity, probity and accountability. He added that they respect him very much in their country, and generally in the West.

People like this are not spendthrift with accolades. Before they say anything positive about you, they must have checked you out over and over. They must have seen that President Buhari has no loot stashed in any part of the world. He has no oil bloc, and his life remains as thrifty and frugal as it was, before he came to power.

No wonder Barack Obama gave him plaudits in the area of integrity during our visit to Washington in 2015. Justin Trudeau of Canada, Thabo Mbeki, former South African President, Justin Welby, Archbishop of Canterbury, and many other world leaders have spoken in the same vein. Buhari, oh Buhari. Those who know the worth of gold appreciate it.

From the palace of the King, we went to another palace. The presidential palace, to see President Sanchez. Another tall man, who has deep respect for our President. He was very delighted to have him as a guest, and said Spain-Nigeria relations could only get better, going forward.

Bilateral agreements and Memorandum of Understanding were signed. On extradition of convicted persons, economic and trade cooperation, sports, fighting COVID-19, tourism, scientific cooperation, and others.

On Thursday, one of the high-points of the visit. President Buhari was Keynote Speaker at the Business Meeting between Spain and Nigeria. He unfolded the opportunities available in our country, and invited investors to come. They hung on his every word, and gave a standing ovation when he finished.

Come and see the meeting with Nigerians in Diaspora on Thursday afternoon. The President was in his elements. When Chairman of Nigerians in Diaspora Commission (NIDCOM), Abike Dabiri-Erewa, introduced Kenneth Omeruo, a Nigerian footballer playing professional soccer in Spain, the President said: “I know him. I always see him on TV, with his peculiar hairstyle.” Looool.

An appreciative President told the footballer that as a student, he didn’t play much of football because of his lean stature, “but I felt safer with hockey, since I had a stick I could use to defend myself.”

The expedition to Spain by President Buhari was very successful on all fronts. Our President did the country proud, represented well, and brought us glory. Why shouldn’t we then flaunt him? We must ‘buga,’ and showcase our leader, no matter what those who cavil say.