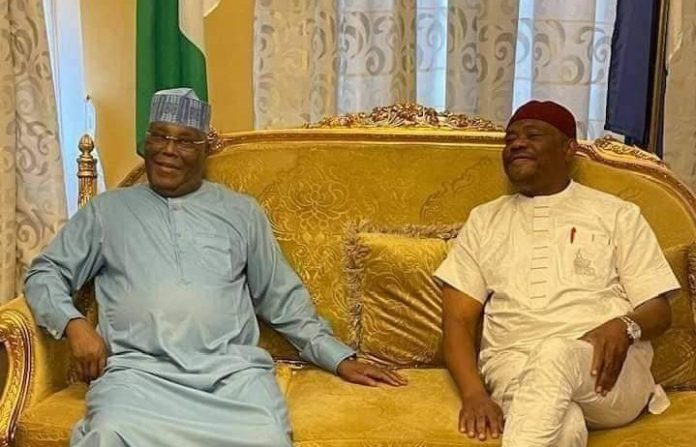 I’m not sure Abubakar (fondly called Atiku) expected this amount of pushback when he chose Okowa over Rivers State Governor Nyesom Wike. But just as it is with the ruling All Progressives Congress (APC) too, the choice of running mate has become a national obsession, exposing Nigeria’s deepest religious and ethnic fault lines.

On the eve of Atiku’s announcement of his running mate, when the media was awash with news that it might go Wike’s way, a party insider described the Rivers State governor as a “caretaker”. He said, privately, that, “You people will be surprised. After Wike lost the party presidential primary, this is the final rite of passage. The caretaker (Wike) will hand the party over to its owners.”

That didn’t make sense. Atiku who has the prerogative to choose his running mate delegated that responsibility to two different committees of the PDP. Both overwhelmingly favoured Wike and recommended him. It also emerged after the closely contested presidential primary of the PDP that Atiku reportedly told Wike that he would be pleased to offer him the position of running mate.

It was not a favour as such. Or a caretaker’s token, as the party insider framed it. After seven years of being out of power at the centre, losing state elections and losing governors to defection, the PDP was broken and on the verge of bankruptcy. Without Wike picking up the pieces and rallying the party, Atiku, the new “landlord” who was on sabbatical to other parties, would not have had a property to return to.

But that’s not the only reason why many thought that Wike’s choice as running mate was a no-brainer. While the South-South remains the fourth largest vote bank, Rivers, more than any other state in the entire South, delivered the largest votes to the PDP in two of the last three presidential elections (1.8 million, 2011; and 1.5 million, 2015) followed by Delta (594,000 against River’s 474,000 in 2019). Not even Oyo State, the South-West’s largest PDP voter base, has matched Rivers in the last three election cycles.

At the presidential primary in May also, Wike gave Atiku a scare from which the former vice president was saved only by Governor Aminu Waziri Tambuwal’s last-minute manoeuvre.

Wike had earned his place. To treat him like a mere caretaker or the thought that he should have been offered the running mate ticket as a favour is quite frankly, ridiculous. Much more than any governor in the South-South, Wike had something extra to bring to the ticket. That was why Atiku approached him.

But whatever the qualities of any potential running mate, the prerogative was always Atiku’s. The PDP has found itself in the current mess not because anyone thought that the running mate tail should wag the dog, but because of the candidate’s disastrous handling of his prerogative. He started as a democrat but ended as a tyrant. It’s a big irony that the man who wants to unify Nigeria can’t seem to gather his wits when he needs them most to unify his own party.

Tambuwal has been heavily criticised – deservedly – for turning his back on Wike. The party Chairman, Iyorchia Ayu, has been hammered for his triumphalism after the PDP presidential primary, and Okowa has also been criticised for breaking ranks with the Southern governors’ demand that the president must come from that region. The harshest criticism must, however, be reserved for the presidential candidate whose arrogance has complicated the party’s problems and damaged its momentum.

It’s been said that it was not Atiku, but the real landlords and “owners” of the party that swayed him. Specifically, the redoubtable General Aliyu Gusau, Bamangar Tukur, associates of former military President Ibrahim Babangida, some traditional rulers and the old PDP network, including Sule Lamido and the Chairman of DAAR Communications, Engineer Raymond Dokpesi, have been mentioned as the anti-Wike ringleaders.

A number of these people were said to have expressed the view that Wike’s brashness, his micromanaging style and combustible temper could harm the party’s chances, especially in the North.

Whoever may have been opposed and whatever their reasons, the last word was with the candidate. He made the call when, after choosing Okowa, he read a statement that sounded more like Wike’s crime charge sheet than it was Okowa’s pre-nuptial affirmation. He must face up to the mess and deal with it, himself.

Is Wike overplaying his hand? Why doesn’t he just take Lamido’s advice and emulate former governors Peter Odili, Rotimi Amaechi, and more recently, Vice President Yemi Osinbajo, who took their own defeats in their strides and simply moved on? Apart from the settled fact that Wike can no longer be running mate and also the waiting game for him to show exactly how Atiku lied against him, no one is exactly sure what hand he is playing.

The visitors’ parade to the Government House, Port Harcourt, since June which has recorded at least 13 high profile politicians across party lines, is a show of force that is difficult to ignore. But the fact that Wike’s allies have fielded themselves for the next general elections under the flag of the PDP and the BOT is meeting with both sides in attendance is a good place to start.

How to solve a problem like Wike? It’s to admit that Atiku, not Wike, is the problem. It’s hypocritical for those who praised Wike when he was the “caretaker”, picking the party’s bills, sticking his head out for distressed governors and even sponsoring their presidential ambition to suddenly discover the downside of his brashness.

He mismanaged the exit of former Chairman Uche Secondus and overreacted in his face-off with Governor Godwin Obaseki. At a point, he behaved as if the party was his farm and wouldn’t be appeased until he ate every first fruit. But who can deny that he filled a vacuum?

His demand for balance in the party’s top positions is not unreasonable; it’s consistent with Section 7(3)(c) of the party’s constitution. Atiku cannot justify it by citing the Jonathan-Nwodo example, a breach at the time, which in today’s PDP is a monstrous travesty with the party’s candidate, chairman, deputy national chairman, BOT chairman and national treasurer, all from the North. Atiku and his party cannot continue to kick this lopsided can down the road.

All other demands credited to Wike by the press, from control of the National Assembly to a single-term Presidency by Atiku and which of the former vice president’s wife’s turn it should be every other night, are at worst speculations and at best matters for negotiation.

Was the Osun State governorship result a bellwether of Wike’s limited political value? That insinuation has been made in some circles – that Osun proved the PDP does not need Wike to do well in 2023. Those who wish may agree on this convenient lie, but the facts are nuanced. More than any single factor, the internal divisions in the APC and the insatiable demands by party godfathers on Governor Gboyega Oyetola wrecked the party. The lessons from Osun and Ekiti States are parables of how a divided party can damage itself.

Abubakar and Wike must realise that this is a dangerous moment to misjudge or mismanage. The ruling party never looked more vulnerable than at a time when not just the adversaries but President Muhammadu Buhari himself is saying that he is tired and cannot wait to leave office. We are not only tired of him, we’re tired for him, too. For the first time his adversaries and friends agree with one another and with him that he must go and go quickly.

If the PDP misjudges this moment, as some of us desperately wish they would, the party faces the risk of a repeat of the crisis that led to a mass defection by PDP governors to APC in 2014. That was the final nail in the party’s coffin.

If it mismanages it, the party faces the risk of extinction. PDP, as it is now, cannot survive another potential eight years out of power. And should that happen, Atiku would be a far bigger loser than many of his seducers or adversaries.