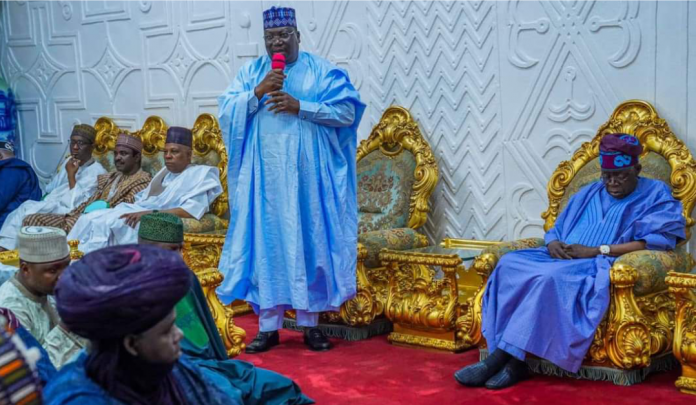 Bola Tinubu, presidential candidate of the All Progressive Congress (APC) has been caught on camera sleeping during a meeting at the palace of the Emir of Gombe State, Abubakar Shehu-Abubakar on Saturday.

Mr Tinubu was in the state to attend the wedding of Governor Muhammadu Inuwa Yahaya’s son, Misbahu and stopped by at the monarch’s palace to seek support for his “lifelong” presidential ambition.

Pictures of him snoring while the meeting was ongoing are trending on social media platforms, suggesting the feebleness of his health, although his supporters are of the opinion that the septuagenarian was barely “meditating.”

Senate President Ahmad Lawan was seen addressing the gathering with a microphone while the APC candidate dozed off.

Spokespersons of the APC campaign council, Bayo Onanuga and Festus Keyamo were not immediately reached for comments Sunday afternoon but the former Lagos governor had in the past dismissed concerns about his health, arguing that the top job which he seeks requires intellectual skills and not physical strength in discharging.