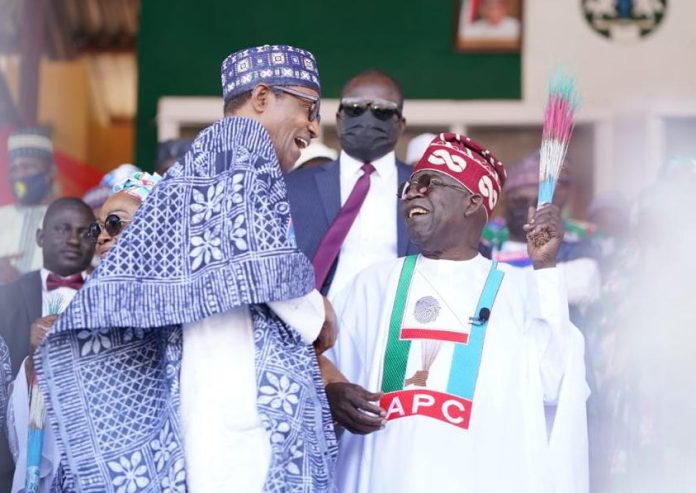 Bola Tinubu, the presidential candidate of the All Progressives Congress (APC) has accused the administration of President Muhammadu Buhari of plotting to stop him from being elected president when the latter completes his tenure in May.

Mr Tinubu made the accusation on Wednesday while campaigning at the MKO Abiola Stadium in Abeokuta, the Ogun State capital.

He said agents of the present regime instigated fuel scarcity and redesigned the three top denomination of naira notes to scuttle his chances of winning the February 25 exercise.

Fuel scarcity nationwide began shortly after Mr Buhari who doubles as the Petroleum Minister signed the Petroleum Industry Bill (PIB) into law last year, followed by the announcement of the redesigning of the N200, N500 and N1000 banknotes scheduled to phased out January 31.

While Central Bank Governor, Godwin Emefiele, recently announced that they was no going back on the deadline for return of old banknotes, President Buhari explained that the policy which had his approval was majorly to checkmate monetary vote buying during the general elections.

Lamenting that the developments were unfavourable to his chances of being elected president, the former Lagos governor expressed optimism that he will win despite the hurdles.

He alleged his opponents within his party and the seat of power do not want the election to hold.

“Let fuel be expensive, only they know where they keep it. Keep petrol, keep the naira, we will vote and be elected,” Tinubu declared. “You may change the ink of naira notes. What you expect will not happen. We will win.

“They said petrol will rise to N200/litre and N500/litre, let your mind be at rest. They don’t want these forthcoming elections to hold. They want to scatter it but that won’t be possible.

“They thought they could cause trouble; they sabotaged fuel but with or without fuel, with or without motorcycles and tricycles, we will vote and win. This is a superior revolution.

“We will take over government through our PVCs. Even if they say there is no fuel, we will trek to the polling units,” he added.