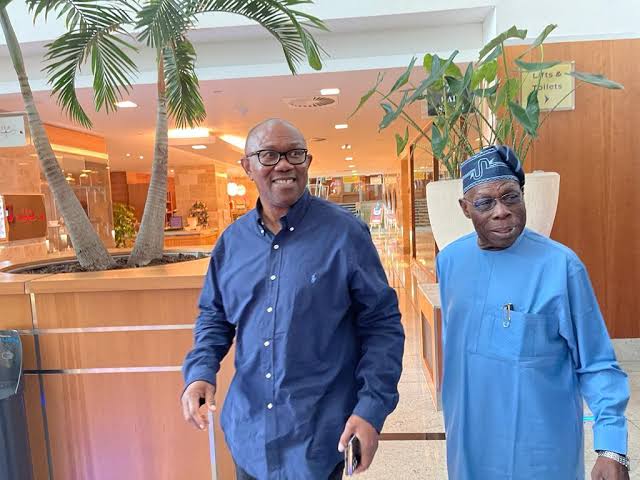 I’m sure he expected the firestorm. As is his custom, he primed and released it to explode at his own time and season. If the letter by former President Olusegun Obasanjo endorsing Labour Party’s Peter Obi had gone unnoticed, uncriticised, and un-replied, then it would not have been Obasanjo’s letter.

The letter had barely landed when the ruling All Progressives Congress (APC), the opposition People’s Democratic Party (PDP) and, in fact, the Presidency all pounced, with the mildest of them all from the PDP.

Whatever the misgivings of the affected parties, I’m sure most might agree on the central message: that young people who constitute 65 percent of Nigeria’s population and, according to the Independent National Electoral Commission (INEC), 76.5 percent of nine million newly registered voters, would play a significant role in the forthcoming general elections.

Those who were only eleven-years-old when President Muhammadu Buhari, who promised change, was voted in only to witness #Endsars six years later when the President was in the first year of his second term, are now of voting age. And those among them who are registered would be voting for the first time, if they have not joined the massive “japa wave” sweeping the country.

It evokes memories of the “Andrew checking-out” era of the 1980s. Yet, if you have seen the lines at any of the embassies in Lagos or Abuja lately – lines spilling onto the pavements and main roads from behind huge iron gates and turnstiles manned by hefty private embassy security men, set against desperate young faces teeming with frustration – then you will know that what we have on our hands today is worse than the Andrews of the 1980s.

It is Andrew plus the mini-exodus of the post-1993 annulled elections, only more gifted and determined than both combined. These are the ones Obasanjo hopes would pour the anger, rage and frustration of #Endsars and the current economic hardship into an electoral tide that would sweep away the old order.

The affected parties also know that Obasanjo’s target – the registered remnant not yet on the “japa wave”, that curious, largely agnostic, adventurous and irreverent block – might play an important role in this election.

In addition to being the country’s largest vote banks, three regions – the North-West, the South-West, and the South South – currently hold the largest concentration of this youth population. According to records from the National Population Commission (NPC), five states – Kano (3.4 million); Lagos (2.7 million); Oyo (1.7 million); Kaduna (2.1 million); and Rivers States (1.8 million) – have the highest overall youth population between the ages of 20 and 34 among Nigeria’s top 10.

Another problem which Obasanjo identified correctly is the sheer scale, scope and complexity of the work required to retrieve Nigeria from the brink. With inflation at 23 percent; youth unemployment at 33 percent; foreign exchange scarcity; declining production and receipts from oil sales; and a looming debt crisis, even Obasanjo’s worst critics might agree that Buhari appears to have used up his successor’s honeymoon.

What then, is the problem with Obasanjo’s letter? Surely, he is entitled to his choice and opinion which, however weighty, have not always been consequential in all elections.

Apart from 1979, when his military government foisted Shehu Shagari on the country, MKO Abiola won in 1993; and Buhari in 2019, both in spite of him. And even when he was a candidate, he lost resoundingly in his own state and his South-West backyard in 1999, only to wrest swathes of the region in a do-or-die subterfuge four years later.

The hairsplitting this time is not so much over Obasanjo’s electoral value. What is left has been so depleted by his ego, his meddlesomeness and his lust for power that it is hardly enough to win him decisive votes in his Totoro/Soroki Ward 11, even if he were on the ballot today.

It does appear that what some folks are concerned about is not Obasanjo’s right of choice or advocacy, but what he might have done, early on, to make it much easier to pave the way for an Igbo presidency.

As president for eight years, Obasanjo vehemently rejected any suggestions to help restructure the country, which would have given the regions, especially the South-East, a fairer footing and created a more equitable and inclusive federal system.

An indispensable man, he wanted so much power for himself and spared no cost to acquire it, that Obasanjo invested at least $500 million in a phantom third term project, according to Chidi Odinkalu and Ayisha Osori in their book, Too Good to Die.

It’s a measure of the complexity of the animal called man, that PDP, the party where Obasanjo was alpha and omega for eight years, was – and apparently remains – unable to provide a pathway for Igbo presidency. APC, the Siamese of the PDP, has fared even worse. Ironically, it is the Labour Party, the child of political necessity whose roots and forebears Obasanjo sought to crush, that has produced the cornerstone of his newfound affection.

During his presidency, the South-East suffered significant infrastructural decline, while he raised a small privileged class from there to manage his conjugal realm or stir up one political crisis after another. Not once, not twice, but three times, he instigated the removal of Igbo Senate presidents (including Chuba Okadigbo) who had a mind of their own. Yet, they were lucky.

The chairman of the Onitsha branch of the NBA, Barnabas Igwe and his wife, were killed in what was suspected to have been politically motivated murders – a bloody record, which littered not just the South-East, but up and down the country, claiming in its trail Obasanjo’s supposed friend and the Attorney-General and Minister of Justice, Bola Ige. The killers are still at large.

If Obasanjo was less lustful of power, less controlling and less obsessed about becoming the only cock in the neighbourhood that must crow, the deadly ferment in Igboland today which is a product of decades of injustice might have been mitigated. Also, the region now locked in the politics of self-mutilation and fratricidal violence to air its grievances, might have had an easier pathway to power.

Obi, first tapped by Obasanjo as Atiku Abubakar’s running mate in 2019, once again deserves Obasanjo’s support and should get it. But what Obasanjo offers is not support; it is nearly five and a half decades of overdue, self-interested atonement disguised as patriotism; it is worse than a Greek gift.

It’s a gift with a history. And the youth to whom he addressed his letter might do well to remember, too. It’s true as he said in his letter that he became military head of state at 39 and General Yakubu Gowon at 33. If you want to know how much Obasanjo loved the youth in his heyday, ask those who witnessed the “Ali-Must-Go” students’ protest in 1978.

That protest by students against increase in school fees at the time, remains one of the most violently repressed in student protest history, a foreshadow of #Endsars. But that was not all.

The year before Ali-Must-Go, “unknown soldiers” burnt down, well, a youth’s haven, Fela’s Kalakuta Republic, and beat residents with rifle butts and iron bars. Fela’s mother, Olufunmilayo, was dragged by the hair and thrown out the window. She survived the fall, but later died from its impact.

And for those too blind to see the repression committed in plain sight, Obasanjo’s military regime shipped some offshore, to an Island 100 km off the coast of Lagos, called Ita-Oko, where critics of the military regime were imprisoned. It was an utterly squalid place which, interestingly, Buhari did not only retain, but also expanded when he seized power in a military coup four years after Obasanjo handed over to a civilian government.

All of this hardly diminishes Obasanjo’s outstanding international record, his appetite for the limelight and, of course, his love of drama. Or indeed his right to suggest who he thinks is best to lead Nigeria. If the leading candidates didn’t think he still matters they would not be fawning over him and feeding his ego for support. They shouldn’t be throwing tantrums now. Obasanjo had them exactly where he wanted.

The young may be fooled, but not the older ones who have seen Obasanjo as a leader, in and out of uniform, on his farm, on the podium, and in his home. If Obi knows Obasanjo as I think he should, my unsolicited advice is that he should read the former president’s letter of endorsement to the end. Somewhere there, in small print, he would find the words: “Buyer Beware!”