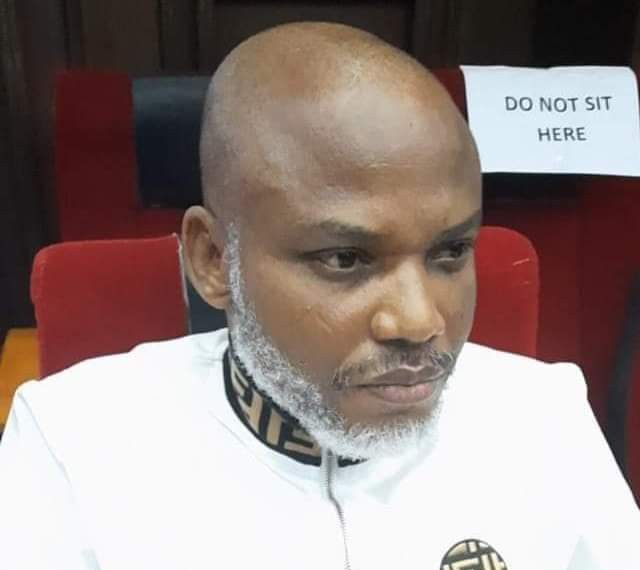 The leader of the Indigenous People of Biafra, Nnamdi Kanu, has asked a court sitting in Abuja to void a Federal High Court Practice Directions (On Trial of Terrorism Cases) 2022 which bars coverage of terrorism cases except as approved by the court.

The fresh directive was released on April 7.

The Chief Judge of the Federal High Court of Nigeria, Justice John Terhemba Tsoho, relying on his constitutional powers , approved the directive saying that it was to “ensure the security and safety of parties; personnel of law enforcement agencies and the Judiciary; as well as members of the general public; while ensuring expeditious and fair trial of persons suspected of having committed acts of terrorism.”

But Kanu’s main lawyer, Mike Ozekhome SAN had on April 8 complained about several procedures in the practice direction especially the aspect blocking press coverage of cases.

In a fresh suit filed before the court, Ifeanyi Ejiofor Esq, prayed the court to nullify the directives for being beyond the powers of the CJ.

“A declaration that the rule-making powers of the 1st Defendant under Section 254 of the Constitution of the Federal Republic of Nigeria 1999 as amended, is limited to the premises of the Federal High Court and do not extend to outside its perimeters, which are under the exclusive responsibility of law enforcement agencies such as the Police, DSS, etc.

“An order of this Honorable court declaring the Federal High Court Practice Directions (On Trial of Terrorism Cases) 2022, unconstitutional, ultra vires, invalid, null, void, and of no effect.”