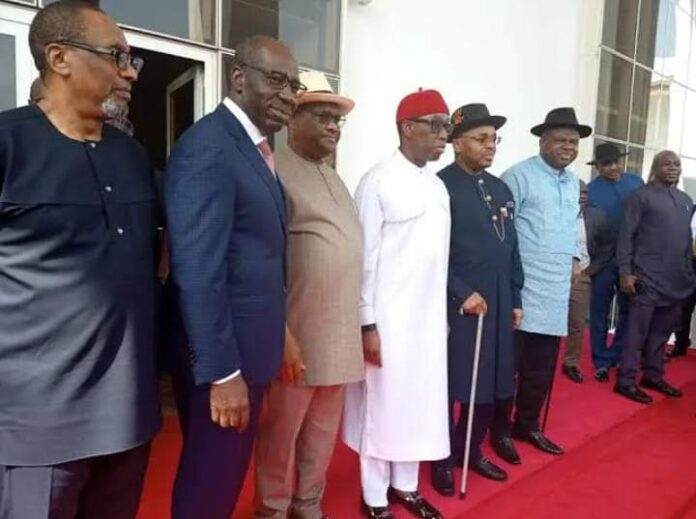 Stakeholders in the South-South geo-political zone have requested for the upward review of oil derivation formula from the present 13 per cent to 50 per cent.

This is contained in a communique read after the two-day public hearing on revenue allocation formula review, organised by the Revenue Mobilization Allocation and Fiscal Commission (RMAFC), held in Port Harcourt, Rivers State.

Present at the event are state governors, local government chairmen, civil society groups among other stakeholders from the six states that make up the oil-rich region.

Fidelis Ekenwo, Delta State Commissioner for Finance, who read the resolution after the gathering said allocation to the states should increase to the basis of 42 per cent to states, 35 and 23 to the Federal Government and local governments respectively.

Mr Ekenwo who said the present situation which allocates more money to the federal promotes wastes and inefficiency at the federal level also requested a special status be accorded Cross River State following the ceding of Bakassi Peninsula and several oil wells to Cameroon by the Federal Government, without any consultation with the people of the state.

“The people of South-South want the 13 per cent derivation to be moved up immediately,” they demanded. “We are recommending that the new derivation should be 50 per cent. We are clearly unhappy because we believe that the current 13 per cent is not doing anything for us.

“Every state should take charge of their resources and contribute an agreed percentage to the centre for the services of the Federal Government.

“Secondly, there should be a review of the legislative list and transfer some responsibilities to the states, such as agriculture, housing, water resources, transport, road construction. These items do not have any business with the Federal Government, because the states and local governments are closer to the people.

“In the last 25 years, has there been any federal housing estate project in the zone? Yet, money is budgeted yearly to the Federal Ministry of Housing.

“All funds generated by revenue generating MDAs should be added to RMAFC for onward distribution to the states and local governments, who are also co-owners of these MDAs.

“Oil companies should relocate their head offices and operational bases to areas of their operation.

“In the South-South, any state that suffers any negative impact also affects other states. We are asking that there should be a special status for Cross River State.

“The country is clearly aware that Bakassi Peninsula and several oil wells in Cross River State were ceded away to Cameroon by the federal government of Nigeria, following the implementation of the Green Tree Agreement.

“This action was carried out unilaterally by the Federal Government without any consensus by the people of Cross River. Hence, a special status should be accorded the state and a special fund of 1.5 per cent of the federation account should be given to them,” the stakeholders requested.