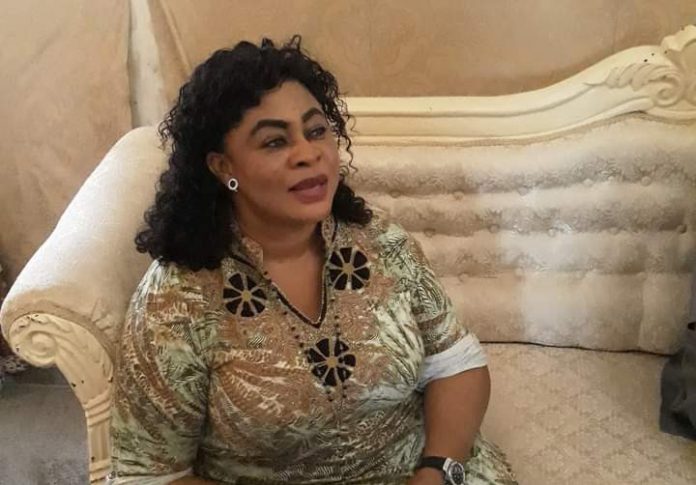 Lawmaker representing Anambra North at the Nigerian Senate, Stella Oduah, has slammed Ebele Obiano, wife of immediate past governor of the state for verbally attacking the widow of late Biafran leader, Bianca Ojukwu.

The scuffle between messrs Obiano and Ojukwu took place at the government house in Awka after Governor Charles Soludo took oath of office as the new state’s helmsman.

Mrs Obiano had left her seat, according to a video clip, and approached Mrs Ojukwu where the letter was calmly seated and a fight ensued shortly.

A source which confided in TODAY POLITICS explained that the verbal attack of Mrs Obiano triggered the physical attack that came from Mrs Ojukwu.

Lambasting the former governor’s wife, Senator Oduah described her as a disgrace for verbally attack on the widow she referred to as the “Pride of Ndigbo.”

“My attention has been drawn to the shameful conduct of the wife of the ex-governor and former first lady of Anambra State, Mrs. Ebelechukwu Obiano, who threw decorum away and attacked Her Excellency, Ambassador Bianca Ojukwu at today’s inauguration ceremony and I hereby condemn in strong terms, this unwarranted attack against the wife of an illustrious son and our very own Ikemba,” the lawmaker said in a statement on Thursday.

“I wish to add that the act exhibited by the former first lady was indecorous and unbecoming of a woman who had acted as a mother of the state and even desirous of serving in other capacities.

“More condemnable is even the gutter and vulgar language used by Mrs Obiano to describe her fellow woman, who is even a widow. I have always held the view that it is only weak minds that label hardworking women like Bianca with nasty names such as “ashawo” and it is more unfortunate when a woman, especially one that has been around the corridors of power, is the one hurling such baseless and regretful invectives against her fellow woman.

“What the world witnessed today at the swearing in ceremony is utterly disgraceful, unfortunate, crude and should never be emulated by the millions of our young girls and women who often look up to public figures with respect to how they conduct themselves.

“Only a few days ago, an innocent woman was publicly paraded naked in the same community our former first lady hails from and one would have thought that rather than showcase this brute nature of fighting and engaging in public fisticuffs with her guest, she should have exerted same energy and fighting spirit in ensuring that justice is done for that widow.

“It saddens me a great deal to see the wife of an illustrious Anambra son, the pride of Ndigbo and an achiever that was once an ambassador of the Federal Republic, being attacked unprovoked and I join all right-thinking persons in praying that we never ever record this type of travesty again in our history as a state,” she concluded.