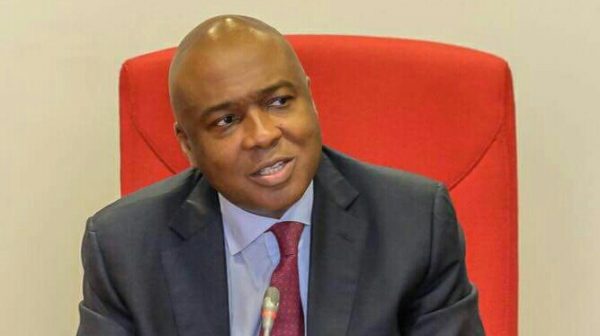 Bukola Saraki, Senate President, and the Nigeria Police are trading words over the security details of the top lawmaker.

Mr Saraki had raised alarm that his life and those of his families were under threat as the police has not provided the much needed security for him.

“The usual practice has been that the commissioner of police personally ensures the security of the senate president whenever he visits his home state. That was the practice during the period of my predecessor and in my first year in office,” the lawmaker said at a press conference held at the Peoples Democratic Party (PDP) campaign headquarters in Abuja on Friday.

“We need to make it clear to the entire world that now that ward to ward campaigns is about to begin in the state and I am set to participate in that grassroots campaign as I have always done, nobody is sure what instructions Mr. Idris has given to the police command in the state. Thus, the entire world should hold the IGP responsible if anything untoward happens to members of my family and myself.

“Do not forget that before now, this same IGP has tried several tricks to implicate me in some criminal charges. First, he arrested some cultists and was about to compel them to claim they worked for me. We exposed the trick early enough and the media also pointed out holes in his story. He quickly withdrew that.

“Later, he went on to the Offa robbery case and politicised the investigation in order to rope me. In the process of forcing suspects to implicate me, the principal suspect died in their custody. He has also not succeeded with that plot. Who knows what else he may have planned? Now, that full campaign is on, which requires my going round, I want the world to hold him personally responsible if anything happens to me.

“I call you today to bring to your attention the sad development in my home state, Kwara state, and the role of the security agencies in giving cover to people who are unleashing violence on our people because they are surprised and cannot understand how and why the people continue to give massive and overwhelming support to the PDP across the state.

“The police have continued to show undisguised hostility to me and my supporters in Kwara state and this latest round of violence is part of efforts to jeopardise and undermine my personal security and that of my immediate and larger family,” Saraki said.

Responding, the police dismissed the claims of the lawmaker and warned him not to mislead the public.

“The Nigeria Police Force did not give any protection to any political thug or shield any APC thug to go to family quarters of the Senate President in Agbaji, Ilorin and vandalize houses, shops and inflict wounds with machete on three people as claimed by the Senate President,” the force spokesman, Jimoh Moshood said in a statement on Friday.

The police said Saraki had not lodged complaint to the police as of the time he held the press conference.

“The Police did not receive any complaint or report of gunshot and wounding as claimed by the Senate President in other areas he mentioned such as Adewole/Adeta, Ile-otan and ubandawaki/pakata.

“For avoidance of doubt, there was no complaint reported at any Police division within Ilorin metropolis or any other Police Division on the 10th January, 2019 till today 11th January 2019 of any attack, wounding, shooting and destruction of any property by any individual(s) or any political party on their members.

“However, Security within Ilorin metropolis and other locations in kwara State has been beefed-up to ensure security of all Nigerians living in the State.

“It is incumbent on the Force to set the record straight and correct the wrong impressions that must have been created in the minds of the general Public and the International Community from the misinformation and misleading account from the Senate President.