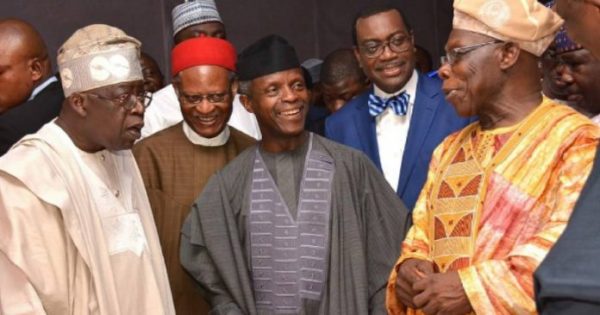 Bola Tinubu, national leader of the All Progressive Congress (APC) has told Former President, Olusegun Obasanjo, to shut up over his rigging allegation.

Mr Obasanjo had on Sunday raised alarm that President Muhammadu Buhari was planning to rig the forthcoming general election.

He cited the controversial appointment of an Independent National Electoral Commission (INEC) officer and the recent plot to oust Walter Onnoghen, Nigeria’s Justice Chief, as case study while passing a vote of no confidence on the electoral body.

The former president who helped the present government rose to power has endorsed the candidacy of Atiku Abubakar of the Peoples Democratic Party (PDP).

Messrs Buhari and Abubakar are major candidates for the election. The president who is seeking re-election on the platform of the APC, handed over his campaign structure to Mr Tinubu, a former governor of Lagos State.

While Buhari has promised to politically deal with Obasanjo, Tinubu asked the former president to keep quiet because he is an expired politician.

“You can hear the other expired leaders like Obasanjo, ranting and lying. Don’t believe him, don’t trust him. He is expired,” the former governor said at the presidential rally of the APC which held in Maiduguri, the Borno state capital, on Monday.

“With the sign of senility experienced by our dear brother, Uncle Obasanjo, I think Ota should be enough a retirement place to keep quiet,” Tinubu said.