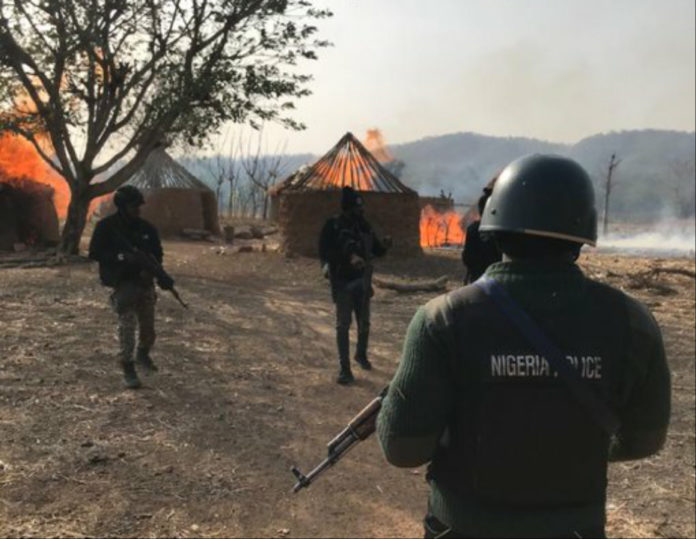 The Nigeria Police Force (NPF) has given update of its raid on hideout of bandits in Kaduna State.

The Police had boasted of killing about 250 bandits during an early morning operation on Wednesday.

But a former lawmaker, Senator Shehu Sani, refused to believe the story challenging the police to show forth evidence to buttress their claims.

It said the operation was necessitated by actionable intelligence linking terror and criminal elements in the super camp to series of terror-related violence, kidnappings, gun-running, cattle rustling and other heinous crimes across the country.

The police has given update on the aftermath of the operation.

The force said aftermath of the operation, cache of arms of ammunitions were recovered from the bandits as two wanted terrorists were gunned down while three terrorists were arrested.

It also announced the passing away of one Inspector Muhammed Abubakar attached to the Police Special Forces who “regrettably died as a result of injuries sustained in the heat of the combat.

“Thirteen other officers (made up of 2 SPs, 1 DSP, 4 Inspectors and 6 Sergeants) including the Pilot and Co-pilot of the Police helicopter, sustained different degrees of injuries and are currently receiving treatment,” the force said in a statement published across its social media accounts.

It also said some of the exhibits recovered by the Police during the operation include 11 AK47 rifles, 730 rounds of live AK47 ammunition, 152 rounds of GPMG ammunition in two chains, 13 pairs of military camouflage uniforms, 2 cartons and 48 sachets of tramadol, four facemasks, phones and other electronic gadgets which are currently subject of forensic investigations.

Meanwhile, citizens living in and around Birnin-Gwari axis of Kaduna State have been enjoined to be on the lookout for fleeing bandits especially those with bullet wounds and report every suspicious behavior to the Police.