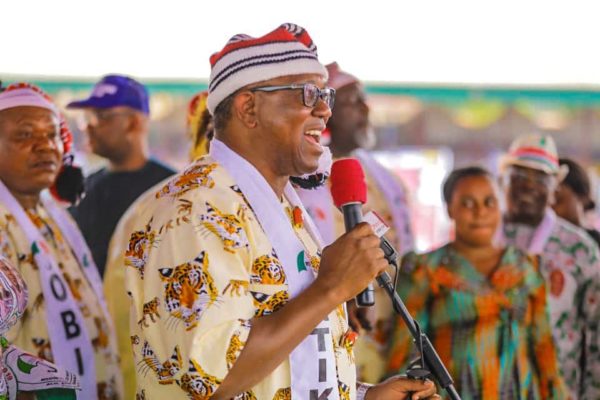 On Monday, August 4, 2004, one week after he made a speech at the Democratic Party’s convention in Boston, I wrote a column for the Nigeriaworld called “Obama: An audacity of hope?” Here is how the column started.

“Jan Schakowsky, an Illinois Congresswoman, recently visited the White House with a congressional delegation. Making her way out, she passed President Bush, and the president literally jumped back on seeing “Obama” button pinned to her chest. Guessing what the president was thinking, she told him, “Mr. President, it is Obama with a “b”. Still, the president did not get it. The congresswoman briefly explained to Bush who Obama was. “Well, I don’t know him,” the president responded. Jan Schakowsky paused and then said to the president, “You will.”

“No doubt, Mr. Bush now knows, just like many watchers of American politics in America and far beyond. Even Stevie Wonder can tell you there is a new phenomenon in the American political arena. His name is Barack Obama.

“Last week, he stood at the Democratic Party convention podium in Boston and made one speech establishing him as the future of American politics. It was an unprecedented introduction of a state senator and a candidate for the U.S. senate. That single performance alone smashed all conventional wisdom and shifted the paradigm across many lines.

“But who is Obama? Who is that skinny kid with a funny name? Was America waiting for him or did he impose himself on America? As Africans, how will his arrival impact our understanding of America and our place in it, not just today but in years to come? Should his conquest become our dream and the dreams of our children? Will his path bring peace to our divided souls and lead us to the proverbial Promised Land, or shall we look for another? …

I proceeded in the article to introduce my readers to Obama and his dreams from his father. I highlighted what made him unique in American political history and why he was uniquely positioned to redefine the polity. Here is how I concluded the piece.

“…Recently, while on a visit to Kenya, he was asked if he sees himself as a Kenyan-American. To that, he answered, “I’ve got a lot of hyphens attached to me. I start with the approach that I’m a human being who cares about people all across the globe. I’m an American and proud of it, and I’m also an African-American, which means I share a bond of struggle but also joy with people of African descent everywhere.”

“Noam Scheiber, writing in the New Republic, attributed Obama’s popularity to his “exotic background.” He has been called smart and handsome. His picture-perfect story impressed many Americans. But most importantly, most Americans see him as non-threatening. As a politician, his appeal goes beyond the black community because to white voters, he has a lot going for him that differentiates him from typical African-Americans. Asked once how he connects with rural white voters, he said, “I know those people. Those are my grandparents. The food they serve is the food my grandparents served when I was growing up. Their manners, their sensibility, their sense of right and wrong – it’s all totally familiar to me.”

“What makes Obama stand out is that he seems not to be weighed down by the pains of the past. He talks about continuing the struggle and acknowledges that he is where he is today because some people before him fought and made sacrifices. But that distance from the pains of the past is one thing Obama shares with most children of African immigrants.

“But being a product of biracial marriage and raised completely by his mother’s white family, Obama does not really represent the typical child of a first-generation African immigrant in America. Many Africans in America more often than not marry from their own ethnicity, nationality and the greater African family. When they step out of these groupings, many marry into the African- American family. Though a good number are in biracial marriages, it is in places like Western Europe that one would see a whole lot of Obamas.

“There is a lesson to all Africans in seeing Obama talk about his Kenyan heritage openly. However, that lesson should not be taken at its face value. In trying to understand Obama, his appeal and his approach, it is also important to remember that coming from a biracial relation gave him a historical advantage. Traditionally, when white America wants to embrace black America, they rally around those who are light-skinned with white blood in them. Earlier in his political career, Obama had difficulty being accepted by African-Americans because he was seen as too light-skinned and too white.

“Obama has been praised for promoting universal values like personal responsibility, hard work, self-improvement through education and love and service to the nation. He is married to an African-American woman named Michelle and they have two daughters aged five and three. While talking about her life with Obama, Michelle, another Harvard Law School graduate, said, “So much of getting ahead in this world is access, networking.”

“When Obama wins the election in November, he will be the third African-American to serve in the Senate since Reconstruction. That in itself is stirring a lot of excitement. The expectation in African communities across America and beyond is that Obama, when elected to the U.S. Senate would become a major advocate for African issues in America. Already, some are saying he would be our man in Washington.

“Invariably, Obama is a bundle of promises. There is the hope that he might take that simple dream Hussein Onyango Obama had in his son, Barack Obama Jr. and turn it into “small miracles” and from there bring light to that dark continent of Africa. The other day, he told the Kenyan Sunday Nation newspaper that to the Bush administration, “Africa has been an afterthought, as it has been throughout American history.”

“Hopefully, we do not have to wait for Obama’s administration in 2016 to remove Africa from the miserable position of being America’s afterthought.”

Yes, rereading this now made me remember the futility of political predictions. I had estimated that Obama would run for president and win in 2016. I was off by eight years.

After just four years in the senate, Obama stepped in to run for president against heavy-weight Hillary Clinton. I watched with great interest the enthusiasm that he brought into America’s political life. While many felt that he would not dethrone the Clinton machine in the Democratic Party, I accurately read it well that he could. And he did.

While I would acknowledge that Nigeria is not America, I could see several parallels in the Peter Obi phenomenon happening in Nigeria now. The great recession that started towards the end of George Bush’s administration made Americans frustrated and irritated at any mention of the same old politicians.

APC’s failure to pick Vice President Osinbajo and PDP’s choice of Atiku Abubakar as its flag bearer has brought Nigerians to a similar juncture. By throwing up Bola Tinubu and Atiku Abubakar, the two major political parties left Nigerians with no option but to look elsewhere for hope. This search for something fresh and creative has brought about the Peter Obi phenomenon.

At the outset of Obama’s run, similar questions today raised about Peter Obi’s run were thrown out. Some said that it wasn’t his time, that he was only testing the waters in preparation for a future run. Some thought that all the white people who cheered Obama would return to their racist baseline and vote for Hilary Clinton during the election. There were those who were sure that Obama counting on small donors, could not march the Clintons’ big-money political machine in fundraising. Even black people did not embrace Obama at the beginning. Some resented that Obama was not African-American enough, having a white mother and an African father. When African-Americans overcame their initial skepticism and embraced Obama, some feared their rally around Obama would repel white Americans who started the movement. Obama overcame those odds and won the Democratic Party’s primary in 2008.

Facing Republican John McCain, greater odds emerged. Obama’s pastor, Rev. Wright, was used to argue that Obama was not a saint and could be dangerous to white America. Some went as far as to insinuate that Obama was a closet Muslim. Through hard work and creative politicking, Obama overcame those odds and triumphed. With shocking similarities and unique differences, all these dynamics are playing out in Peter Obi’s run for president.

Dethroning the two big political parties in Nigeria in 2023 does not look possible to those who see political success from the old prism. A paradigm shift has happened in this new world where the biggest taxi company does not own a car and the biggest hospitality company does not own a hotel. If harnessed well, the way Obama’s campaign ran in 2008, Peter Obi’s campaign can overcome whatever odds placed in its front and shock Nigerians too.

If Peter Obi fails, it won’t be because it is not possible. It will be because, like everything about Nigeria, it is assumed to be difficult and left untried. While acknowledging that Nigeria is not America, that Peter Obi is not Obama, that Obama did not solve the deeply-rooted ills of America, that Peter Obi will not solve the fundamental problems with Nigeria, the only relatively peaceful way for Nigeria to see tomorrow and have an extended chance to rethink its path and reposition its faith is to have the audacity to find hope somewhere today – somewhere different from where Bola Tinubu and Atiku Abubakar reside.

Rudolf Ogoo Okonkwo teaches Post-Colonial African History at the School of Visual Arts in New York City. He is also the host of Dr. Damages Show. His books include “This American Life Sef”, “Children of a Retired God” among others.
Other posts from author.