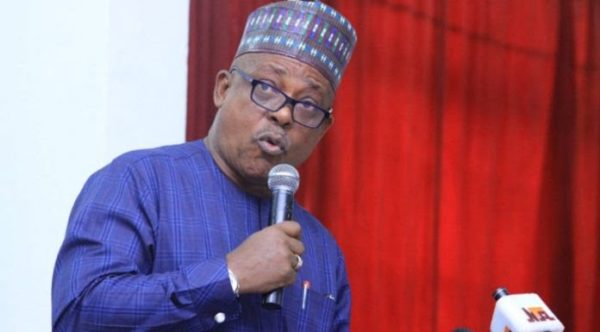 The Peoples Democratic Party (PDP) has threatened that there will be war if the forthcoming election is rigged.

National Chairman of the opposition party, Uche Secondus, handed down the threat during the party’s presidential rally in Delta State on Thursday.

President Muhammadu Buhari, who is seeking a second term in office on the platform of the ruling All Progressive Congress (APC), has severally been accused of plotting to rig the general election in his favour and that of his party.

Aside the PDP, other notable Nigerians, including a former president, Olusegun Obasanjo, has accused the APC-led administration of planning to thwart the will of the people in the next month election.

Threatening war, the PDP said the only condition to prevent the armed conflict is to make sure the election is not rigged.

“Today, by your mandate, we warn INEC and we believe there are good people in INEC… we know that government is pressuring INEC to rig this election, but if they rig this election, they’re looking for war,” Mr Secondus was quoted by Sahara Reporters to have said while addressing party supporters.

“If they need peace, they must not rig the election — because everybody is ready for this election.

“We want to also advise our security agencies — and we know there are good people there protecting lives and properties, which is their primary duty. We believe that they will obey the Constitution, not to break it like Mr. President is breaking our laws. They will obey the Constitution and be neutral, but if they don’t, if they join hands with INEC to rig this election, what are they looking for?” the PDP top official asked.

“War,” the party supporters were reported to have chanted back.

This is not the first time a threat of such magnitude would be made. POLITICS TIMES recalls that the now ruling APC during their days in the opposition had threatened to form a parallel government if the 2015 presidential election is rigged. The election adjudged to be free, fair and credible came and their candidate won.

But the ruling party are now being accused to attempting to temper with the will of the people. Some critics are citing the president’s refusal to assent to the amended electoral bill.

Also, the recent appointment of an Independent National Electoral Commission (INEC) officer said to be related to Mr Buhari and the alleged unconstitutional suspension of Nigeria’s Chief Justice are reference points often cited by critics of the administration.