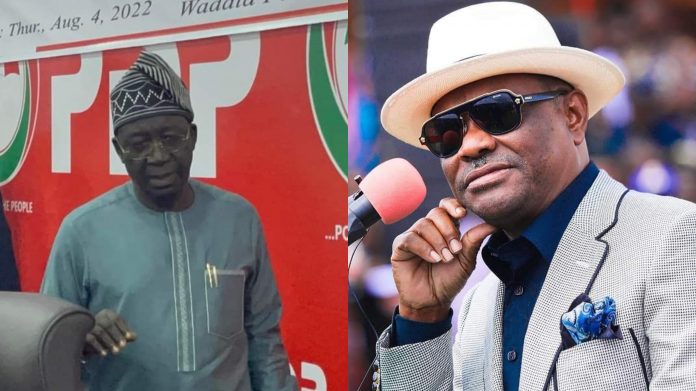 The crisis rocking the main opposition party in the country might be far from being over with Governor Nyesom Wike of Rivers State accusing Iyorchia Ayu, national chairman of the Peoples Democratic Party (PDP) of trickishly collecting about N1 billion from a presidential aspirant of the party.

Mr Wike made the allegation on Friday during a broadcasted media chat in Port Harcourt, Rivers State capital.

He challenged the embattled opposition chieftain his camp is hell-bent on ousting to deny the allegation and he will spill more beans of the underhand dealings on the pretext that state governors were not ready to bankroll the party, hence he resorted to trickishly obtaining the said amount from the unnamed aspirant in Lagos.

“Ayu is corrupt. Quote me. I am a lawyer and I am the governor of Rivers State,” Mr Wike alleged. “Can Ayu deny that he did not collect one billion naira from Lagos. He told one of the PDP presidential aspirants before the primaries that the governors were not ready to fund the party.”

The governor says he knows “how the money was arranged and those involved in packaging the money,” daring Mr Ayu to “come out to tell Nigerians it is not true and I will reveal more.”

“Let him deny, I will tell you who gave him the money; not Lagos government. The money was given to him in Lagos. He met one of the presidential aspirants and told him that he is not sure these governors will want to sponsor the party.

“Let Ayu say no. I will even call some of the business men and how the money was arranged in Lagos. That money did not enter into the account of PDP. But we are not attacking Ayu on that basis. Look I am not any governor. I am a serious governor. I can’t just come here and begin to say anything. I say I challenge (him).

“Let him deny this,” he dared.

Mr Ayu is currently out of the country and attempts by TODAY POLITICS to reach his media aide, Simon Imobo-Tswam, were unsuccessful as his known telephone numbers were unreachable as at press time.