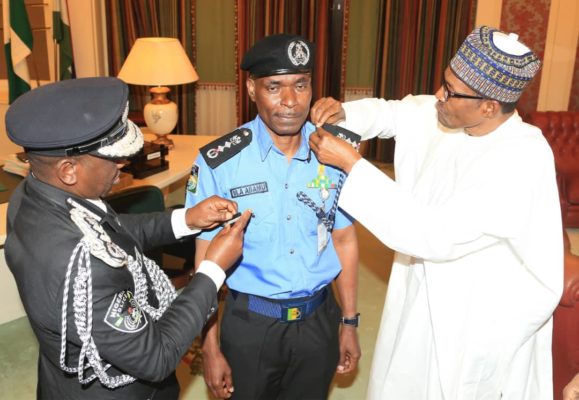 President Muhammadu Buhari has appointed a new head for the Nigeria Police on Tuesday.

The appointment is sequel to the retirement of Ibrahim Idris who had manned the force since 2016.

Mohammed Adamu, the new Police boss is from Nasarawa state. He is on acting capacity pending when the national assembly will ratify his appointment.

Speaking with reporters after taking over the reins of the force, Adamu thanked Buhari for finding him worthy to serve.

He admitted that there were security challenges but vowed to do his best in tackling them.

“I want to thank Mr. President for considering me worthy to be the next inspector-general of police,” Adamu said.

“We know that there are security challenges that we need to tackle in the country. Issues of kidnapping, abduction and other security challenges. From the strategies put in place by the former IGP, we will restrategise and make sure that we tackle these challenges squarely.

“On the elections, you have heard from the former IGP, adequate arrangement has been made to make sure that free and fair and credible elections take place in Nigeria.

“We are going to build up on the strategies put in place to make sure that we have hitch-free elections in the country.

“We are professionals. We are going to stick by the rules, we are going to do the right thing. We will not go outside the ethics of our job to do things that are untoward, everybody will be given level playing ground to play his or her politics,” he said.

In a statement made available to POLITICS TIMES and signed by the group’s national publicity secretary, Mr. Ibrahim Abubakar, the group noted that the choice of the new IGP is a welcomed development as Mr. Adamu is a fine officer who has what it takes to re-invent the Nigerian Police Force in the face of the security challenges the country is currently encountering.

The statement further noted that there was no better time for a fine officer like Adamu to lead the Nigerian Police Force other than now since Adamu is a thorough breed police officer trained from the rank and file.

“Therefore, we thank President Buhari for making the right choice in the best interest of the nation at this material time by appointing Abubakar Adamu as Acting IGP,” Abubakar said.

“At this point, we say congratulations to IGP Adamu,” he added.