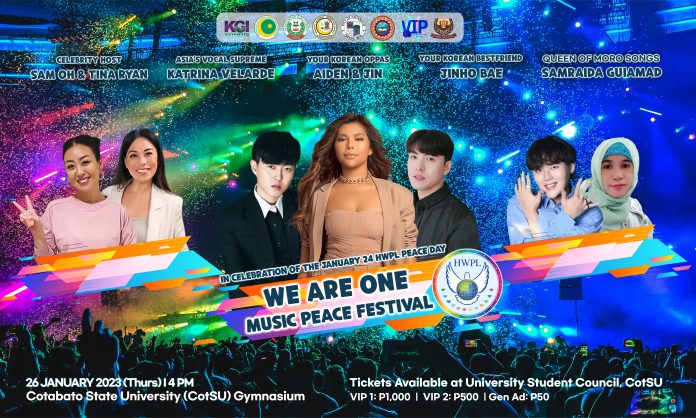 COTABATO CITY—The We Are One Music Peace Festival will be held at the Cotabato State University (CSU) Gymnasium on January 26, 2023 (Thursday). Around 1,000 students, faculty members, government officials, religious leaders and peace advocates from civil society organizations are expected to attend.

With the theme, “Peace is Here,” the Music Peace Festival aims to unify the voices of the youth and citizens in Mindanao to call for the cessation of wars around the world such as the one in Ukraine that has raised concerns over the security and economy of many countries including the Philippines. The festival is designed to raise awareness of the need for active involvement of citizens and national leaders for a peaceful society.

Among the guest performers are “Suklay Diva” and “Asia’s Vocal Supreme” Katrina Velarde, and “The Queen of Moro Songs”, Samraida. Korean singers Aiden and Jin, and local bands The Genremen Band and The Hauz Band will also be performing.

The General Admission ticket costs P50. All proceeds will be used for the construction of the Peace Monument which is set to unveil on the following day, January 27th, also at Cotabato State University (CSU).

Interested audiences can buy their tickets in advance through this link: http://bit.ly/3i8jXHc. Tickets will also be available at CSU starting next week. For inquiries, contact Ms. Alecka (0945 390 4537).