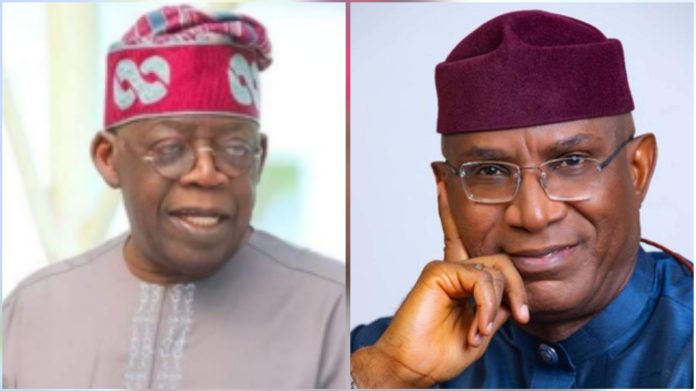 Bola Tinubu, the presidential candidate of the All Progressive Congress (APC) has blown another gaffe, being the latest of his misspeak series.

Mr Tinubu, a former Lagos governor, occasionally trends on social media due to series of his gaffes since political campaigns began late September.

During his visit to Delta State on Friday, the ruling party’s candidate, while addressing his supporters, said outgoing Deputy Senate President, Ovie Omo-Agege will be the governor of Niger Delta state next year.

“I equally recognise, today, the deputy senate president currently,” the politician said in a trending video clip which showed him reading from a prepared speech. “And he will be the governor of Niger Delta state.”

Supporters of the APC clapped while their presidential candidate apparently mistook the Niger Delta region comprising of six states for Delta State.

The former governor who is in the state to dialogue with stakeholders of the Gbamaturu Kingdom among others, took a swipe at his rivals, claiming Atiku Abubakar of the Peoples Democratic Party (PDP) is tired, while Peter Obi, the flag-bearer of the Labour Party (LP) is a statistical liar.

The latest clanger comes weeks after another in Plateau, during the flag-off of his campaign, where he prayed God to bless the opposition party before recalling the acronym of his party.

Last month, he commended Governor Nasir El-rufai of Kaduna, for turning the rotten situation of the state to a bad one, a remark his campaign council claimed was a slip of tongue.

He is being reported in some sections of the media of suffering from dementia, a development that probably may have led to him avoiding presidential debates and opting for town hall meetings, most of which he reads from a prepared speech.