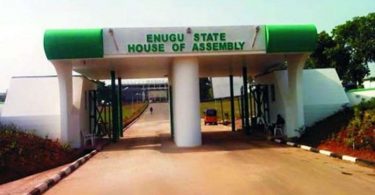 The Enugu State House of Assembly, on Thursday, described as ‘great’ the enormous job being executed by the Enugu Capital Territory Development Authority, ECTDA, and commended it’s Chairman, Dr Josef Onoh for his brave leadership of the agency.

The House made the commendation when it invited Onoh to appeared before the general House to answer questions on why he failed to appear before the House Special committee investigating alleged double taxation in the state.

Tempers however flayed when some members of the House of Assembly made remarks on the media attention Onoh’s gained when the house extended three invitations to him without his appearance.

Speaker of the House, Rt Hon Edward Ubosi, however doused the tension when he extolled Onoh’s job demands, remaking that Onoh’s father contributed greatly to the creation of Enugu state.

Ubosi stated that the House did not in any of it’s invitations to Onoh and other Executive members indicate land grabbing as part of it’s investigation.

“It was only on the allegations of extortion of levies and double taxation, the house is not happy with you because you were a member of this House of Assembly who served well as House Committee chairman on appropriation and the records are there. I remember your father fought for the State House of Assembly and for the state, same as my grandfather.

“We don’t have issues with you. We are happy with your duty as the Chairman of Enugu Capital Territory Development Authority because I know that it’s not easy. Our invitation was just a meeting which was turned into politics and you are a young man with a future, just take a bow and go,” Ubosi said.

“I didn’t turn your invitations down, the only thing is that the staff we sent came empty-handed because we didn’t give him any document to present to the committee. I never said that the House wanted financial inducement” Onoh responded