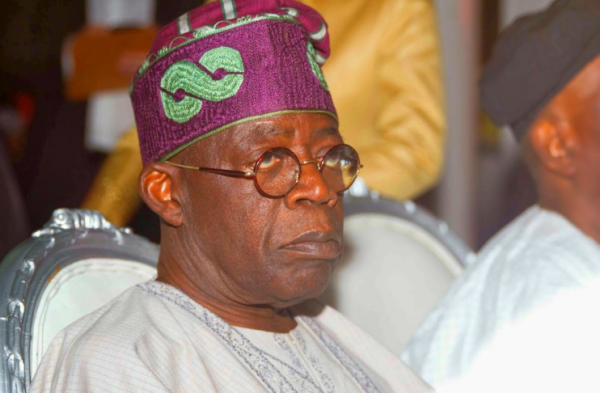 Bola Tinubu, national leader of the All Progressive Congress (APC) says former president, Olusegun Obasanjo, does not have the right to complain about election rigging.

This comes a day after the former Lagos State governor told the former Nigerian leader to shut up because he has expired in Nigerian Politics.

The former president had on Sunday, while addressing Nigerians on the state of the nation, renewed his political battle with President Muhammadu Buhari. He had asked the president not to seek re-election against on account of incompetence, nepotism among others.

In his Sunday’s address, he alleged that the president was planning to rig the forthcoming general election.

Obasanjo cited the controversial appointment of an Independent National Electoral Commission (INEC) officer and the recent plot to oust Walter Onnoghen, Nigeria’s Justice Chief, as case study while passing a vote of no confidence on the electoral body.

Reacting in a statement titled ‘Chief Obasanjo – At War Against His Own Deeds’ on Tuesday, the APC top official said the Obasanjo has no right to complain about election rigging.

He said this is because the former president is a known election rigger who rigs without peer.

“…Chief Obasanjo should be the last to complain about election rigging,” Tinubu said.

“Chief Obasanjo is the person most responsible for the flaws in the Nigerian political economy since 1999. His ego is as expansive as the firmament but his good deeds would fit into a modest sachet with ample room to spare.

“The worst of Obasanjo’s record, I have yet to describe. When it comes to elections, he has been a rigger without peer.

“There is no election which occurred under Obasanjo’s watch or in which he participated that did not involve cheating on his part. Even the late President Umaru Musa Yar ‘Adua admitted he was the beneficiary of a flawed election engineered by none other than today’s vociferous complainant.

“For Obasanjo to lament over electoral malpractice is tantamount to the ocean complaining that a few raindrops are causing it to get wet.

“In his writing, Obasanjo alleges the Osun election indicates rigging will take place in the coming contests. Let’s go straight to the truth, Obasanjo has no grievance with the process. His personal history suggests fair process is the least of his concerns.

“What knocks Obasanjo off kilter is that he could not dictate the result in Osun. He told those in the PDP that he held sway in Osun and throughout the Southwest. They believed him. He led them to defeat notwithstanding the almost impossible voter turnout in PDP strongholds in that state. Obasanjo can only win an election when has the final say over the final vote tally. Otherwise, he is a troubled man,” the former governor said.