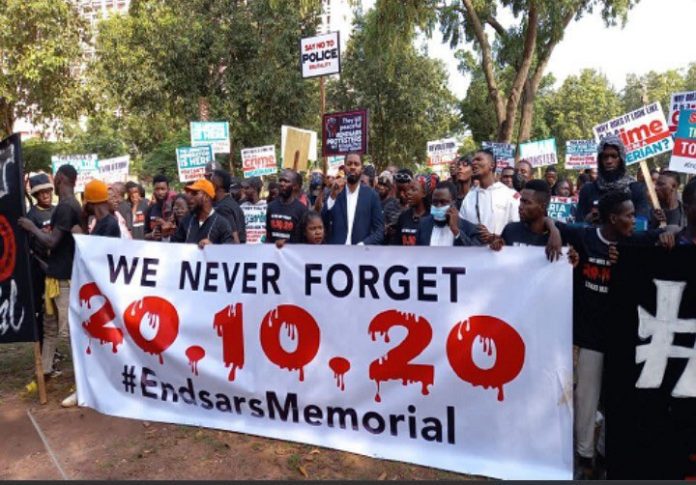 The Police in Lagos State on Thursday arrested dozens of coffin, placard, flower-bearing protesters at the Lekki tollgate, where their colleagues were killed two years ago.

The protesters who assembled at the tollgate at about 10am matched a few meters away, while shouts of “justice” rented the air, saying they were demanding justice for the perpetrators of the gruesome killings to be “brought to book.”

While the demonstrations was ongoing, police officers, after firing teargas and water cannon, arrested those it could lay hands after brutalising them.

The demonstrators were at the venue to commemorate the loss of lives that occurred during the historic protests nationwide, demanding the scrapping of defunct police brutal unit codenamed Special Anti-Robbery Squad (SARS).

The unit accused of torturing, extorting and extra-judicial killings was dissolved after the protest that began from Lagos spread across the country.

Despite the announcement scrapping SARS, the youthful protesters refused to halt the demonstrations, accusing the federal government of insincerity, have made similar pronouncements in the past while the police unit continued atrocities.

On October 20, 2022, troops of the Nigerian Army stormed the protest scene and open fire on the protesters bearing Nigerian flags and other regalia.

The President Muhammadu Buhari regime denied citizens were killed by that invasion, describing it as massacre without bodies.

Denying the protesters were manhandled while commemorating the dead of their comrades, Benjamin Hundeyin, police spokesman, said teargas and water cannon were used in chasing away some miscreants in their midsts.

“Peaceful persons were allowed to move around without interference from the police,” Mr Hundeyin said on Twitter. “Some of them that decided to be lawless and start mounting the toll complex, an action threatening the existing law and order in the area, were dispersed with teargas.

“There was no use of baton, neither was there physical contact. We equally do not have any record of shooting. We would, however, appreciate evidence of gunshots, maybe a video, to enable us take appropriate action.”