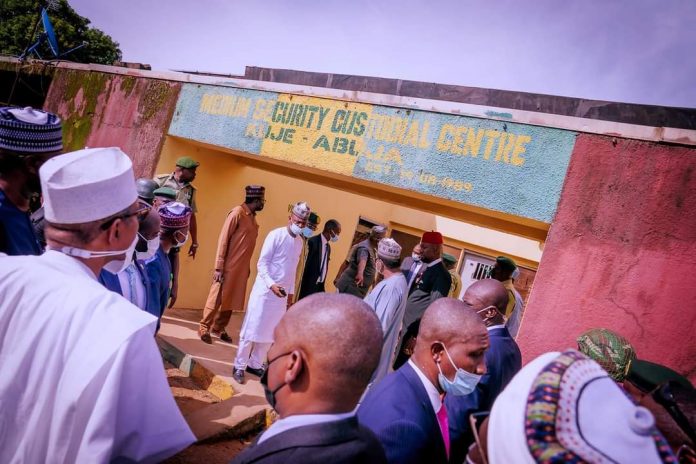 President Muhammadu Buhari on Wednesday wailed over the attack on Kuje Correctional Center in Abuja by Boko Haram terrorists.

Members of the terrorist group late Tuesday overran  the detention facility prominent for holding high profile suspects, freeing over 60 of its members detained therein while hundreds of other inmates are at large.

Mr Buhari, who said he was saddened and shocked at the development, visited the attacked facility before wailing on Twitter Wednesday evening, requesting for a comprehensive report on what transpired.

He said he was disappointed on how the terrorists were able to plan the attack, executed it and went away unchallenged.

“Saddened by the attack on the Medium Security Custodial Centre, Kuje. I am disappointed with the intelligence system,” Mr Buhari wailed on the micro-blogging site.

“How can terrorists organize, have weapons, attack a security installation and get away with it? the Nigerian leader queried. “I am expecting a comprehensive report on this shocking incident.”

Unconfirmed reports say military personnel stationed at the federal prison facility were withdrawn barely twenty-four hours before the attackers struck. This has not been independently verified by TODAY POLITICS.