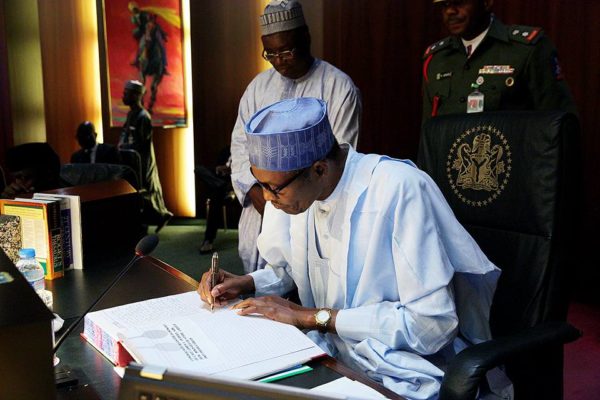 The controversy of Mr Onnoghen recently accused of failing to declare his assets began on January 12 when a civil society organisation submitted a petition at the Code of Conduct Bureau, (CCB) and was arraigned by the federal government on January 14.

It was later discovered that the head of the group was an ex-aide of the president. With the discovery, critics said the trial was a plot by the president to oust the jurist and appoint someone who will help him rig the 2019 general election when election litigations get the Supreme Court which is the apex court of the land.

Different suits have been filed at several courts with that of the Court of Appeal halting the trial of the accused at the Code of Conduct Tribunal, (CCT).

At the event, the president also appointed Ibrahim Tanko Mohammed, from Bauchi State to replace the ousted judiciary chief.

Mr Mohammed, according to Buhari will be the acting Chief Justice of Nigeria, pending the outcome of the trial of Mr Onnoghen.

The president said he was acting on the recommendation of the CCT which urged him to suspend the jurist.

Critics are saying the Appeal Court having halted the trial of the oust Chief Justice, the president ought not to have suspended him.