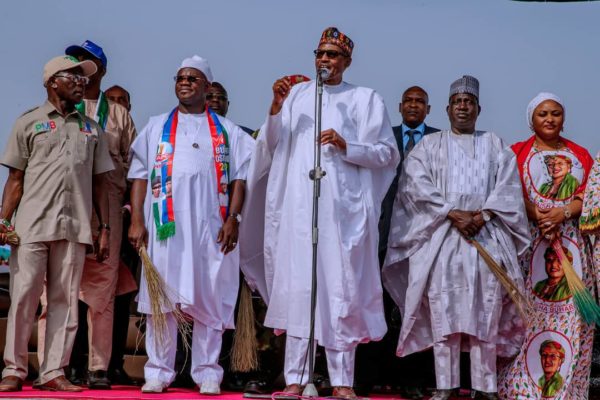 Nigerians have been warned against electing candidates of the opposition Peoples Democratic Party (PDP) in the general electing commencing next month.

The warning comes from President Muhammadu Buhari who is seeking a second term in office.

Me Buhari gave the advise at the All Progressives Congress (APC) presidential rally in Lokoja, Kogi state capital, on Wednesday.

The president says if the PDP which had been in power since the return to democracy in 1999 but was oust in 2015 is given a second chance they will cover their misdeeds while they held sway.

“All we’re trying to do is to remind you to think, ‘Where were we in 2015 when we came in (and) where are we now?’ ‘What have we been able to achieve with the resources available to us?’” Buhari queried.

“To remind you, I have challenged anybody in Nigeria to check in Europe, America and Asia that Nigeria was producing 2.1 million barrels a day at the cost of US$100. So, Nigeria was earning 2,100,000 times US$100 times 16 years.

“Where was that money? The railway was killed. There was no power. They said they spent $16 billion, not naira, on power. Where’s the power?

“I’m warning you, don’t make any mistake of choosing any PDP candidate. What they will try to do is to cover the theft they’ve committed against the nation,” he advised.

While promising to secure the country against insurgency, banditry and other violent crimes, Buhari dismissed insinuations in some quarters that his party was planning to rig the general election.