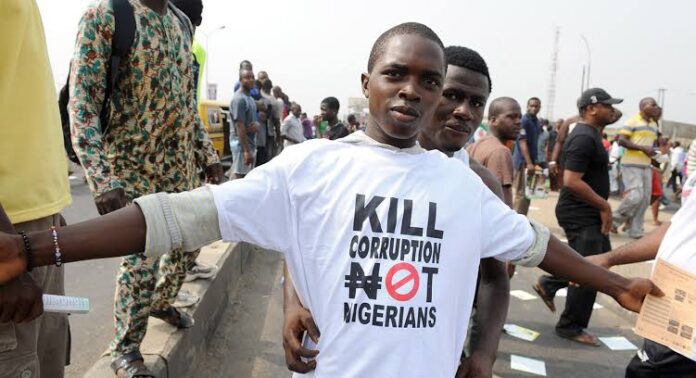 The unravelings of the past seven years should jolt us to sombre reality, if for any reason we are still in the thrall of propagandised political chicanery. Any candidate who makes his election campaign about fighting corruption without antecedented commitment to this end and without a clear plan and strategy is thoroughly lying. Fighting corruption takes grueling years of institutional and attitudinal reforms – beginning from the very top to the bottom. And it takes gravitas and the tearing down of the current system.

President Muhammadu Buhari came to power on a broom flight to clean up the much-noised miasma of corruption in the Jonathan administration. Settling in, the Buhari government quickly applied itself to pseudo-reformist proselytising. The government caterwauled over how the Jonathan administration magicked the public treasury into exclusive pockets. The biggest news headline at the time was — STOLEN $2.1bn ARMS FUND.

Sambo Dasuki, former national security adviser (NSA), was the first casualty of the Buhari anti-corruption blitz. The government accused him of being the wheel from where corruption in the Jonathan administration gyrated. His office was accused of diverting $2.1 billion earmarked for arms purchase.

The Buhari government incarcerated Dasuki illegally, denying him the right to defend himself in court. And days segued into months and months into years – they held him. It became clear that the administration’s war was not against corruption but against perceived adversaries. It also became obvious that the anti-corruption crusade was only to excite Nigerians and to deflect citizens’ interrogation from the government’s failings. The arms probe has now gone the way of others before it – to the netherworld of hypocrisy – where all probes go to die.

Also, as those accused of partaking in the communal sleaze under Jonathan were put in the dock, the Economic and Financial Crimes Commission under Ibrahim Magu, dispatched its utilities to securing conviction in the media instead of the court. The arraignment of ex-public officers was well-noised to whet the appetite of Nigerians who were hungry to see those who stole from them chalk up time and penitence in jail. But it ended there – just noise. Some of the ex-military officers whom the anti-graft agency charged for allegedly tucking into the $2.1 billion arms ‘scam’ are free men today, and even the so-called loot has been reportedly re-looted by the hirelings of the current government.

We exist in a Dickensian society. Those entrusted with securing citizens against public theft are themselves crooks in Messianic raiment. The watchdogs are themselves bloodhounds and vampires.

Where is Babachir Lawal? The case of the former secretary to the government of the federation (SGF) has been sputtering to asphyxiation in court. Lawal was accused of awarding contracts worth over N500 million to himself, but the disgraced former SGF is back in the political highlife, giving lectures on ‘’good governance and corruption’’ and campaigning for politicians seeking elective office.

Nigerians, both current and former public officers, were named ignominiously in reports revealing how the Nigerian elite evade tax, perjure, loot, and shore up questionable wealth in tax havens.

A public servant who was recently appointed as the head of a critical government agency by the Buhari administration was reported to have purchased a piece of property worth 475,000 pounds in London, UK, after he was appointed as an executive director at the agency in 2017. The asset is said to be his largest single investment in the UK property market. This public officer was initially appointed in acting capacity, but President Buhari approved his appointment as substantive managing director of the agency in February 2022 – despite the revelations by the Pandora Papers.

The EFCC recently announced it arrested Ahmed Idris, suspended accountant-general of the federation, over alleged misappropriation of N80 billion. Idris is alleged to have purchased a stretch of property in Abuja and Kano while in office. But the trajectory of this case is clear. It will go the way of others before it – to the netherworld of official compromise and collusion.

Nigeria’s corruption respects diversity and federal character. Resources and public goods may not be equitably distributed among all Nigerians, and even political offices could be sectionalised, but on corruption, there is always a geographical balance. There is always a perfect ethnic representation at the table of loot. Where true democracy is at play among the Nigerian elite is on corruption. On corruption, there is common ground. Corruption is the centrifugal force pulling all together in the council of interests. Democratised corruption.

The reality is corruption cannot be fought without institutional and attitudinal reforms as well as personal example, sincerity, commitment, clear plan and strategy by members of the highest level of leadership and those at the subnational level down to the residual rung. Any Nigerian leader who seeks to dare the undared must be willing to be unpopular.

Nigerians must beware of candidates who come in the name of fighting corruption – without any visible strategy. They know it will excite the people. But beware.