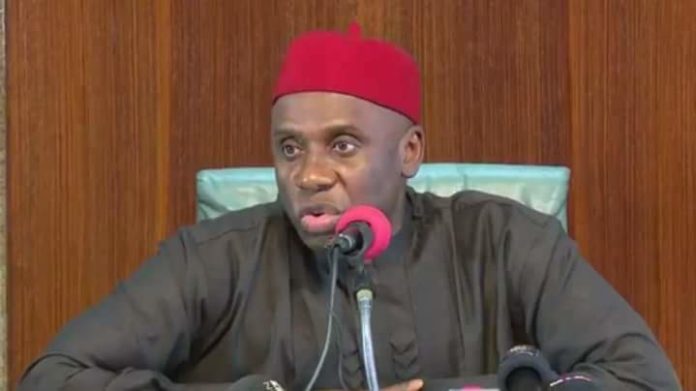 Rotimi Amaechi, Transportation Minister, has described Olusegun Obasanjo, former president, as the only patriotic Nigerian he has seen on earth.

Mr Amaechi made the claim in the latest version of audio clips in which his voice was heard on recently.

The latest version was released by ex-presidential aide, Reno Omokri, who has described himself as the tormentor of President Muhammadu Buhari administration.

In previous clips, the minister was heard criticizing his principal as one who do not adhere to advise not care about public opinions about his administration.

He was also heard saying for the country to be better all living beings needs to be killed.

Describing Nigerians as cowards, Amaechi said he does not believe the country can change for the better.

“I don’t think Nigeria can change, a lot of Nigerians are cowards. You know why Nigeria can’t change, it’s that the elites… and a lot of you are either elites or potential elites,” Amaechi said in the latest clip.

“You are not Nigerians. The only Nigerian I have seen on earth is Obasanjo. Hate him, like him, he is not a Yoruba man, he is not an Hausa man, He can be a criminal, He can be stealing money but he loves Nigeria,” the minister added.

Obasanjo who had endorsed Buhari during the 2015 general election but has kicked against the president’s ambition to run for a second term on account of incompetence has accused the Nigerian Leader of plotting to rig the election with state-owned agencies.

Buhari in turn has promised to
politically tutor the former president a lesson he was not going to forget during his stay on earth.