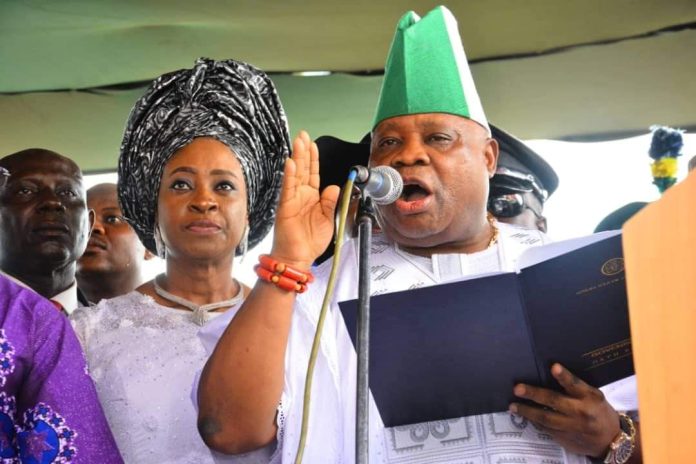 Ademola Adeleke, a former Osun west lawmaker, has been sworn in as the new governor of the state.

Mr Adeleke of the Peoples Democratic Party (PDP) took his oath of office on Sunday at the Osogbo city stadium.

He trounced Governor Gboyega Oyetola at the polls, thwarting the re-election bid of the All Progressive Congress (APC) candidate who is now challenging the outcome of the July 22 exercise.

At the event, the governor vowed to meet the expectations of the people while soliciting their support.

“I am well aware of the fact that my responsibility as governor and chief security entails meeting the expectation of our people,” he said.

In a statement by his spokesman, Olawale Rasheed, the governor on Sunday directed career heads of local government areas (LGAs) and area councils development areas (ACDAs) to take charge of their councils from the sacked council chairmen and councillors.

“Governor Adeleke also directed the most senior career heads across all the local government areas to take charge of their councils,” the statement said. “This is in compliance with the judgment of the Federal High Court sitting in Osogbo that sacked the council the local government chairmen and councillors.”