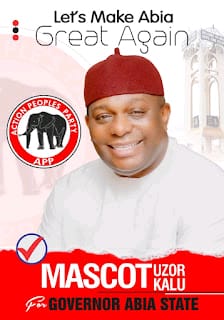 Most times l found myself pitying Mascot Orji over his political struggles because, over the years, people have refused to listen to him and hear him out. The society judged him before he arrived. He is suffering and carrying the burden that children from well pronounced families do carry. It was a burden that our everlasting leader Ikemba Ojukwu carried that made him to rebel against his father, one of the richest men in Africa then and enrolled in the army, well the military was being looked down on. He wanted his own badge of honour beyond the father’s image and he got it.

Mascot the governorship candidate of Action Peoples Party (App) for Abia State, on a personal note is a very smart, intelligent, humble, easy-going young and dynamic man. No one has ever had an encounter with him and came out disappointed. He’s honest and straightforward to the core. He’s hardworking and someone that gives you his words and keeps to it.

But because he has been suffering from the shadow of his not being seen beyond his elder brother and mother; two political bulldozers of Abia, it has been difficult to hear him out and give him a chance.

Taking his family by surprise may look radical, but that’s a step he ought to have taken long ago. Orji Uzor Kalu, his most senior brother and former governor of Abia State did not help matter. He love his junior brother to a fault and his pampering and shadowing him (Mascot) over the years has not been to Mascot’s advantage. The influence of his family have made it easier for people to blind their minds to socio-political reasoning and understand one simple fact; this young man has his own life to live. With that line of thought the issue of why will he be governor after his senior brother was governor won’t arise.

What people ought to know which we have been missing is that politics isn’t made for everyone and there are families that are cut out for it. Just like in America we have the John Kennedy, George Bush, Bill Clinton etc, families holding offices repeatedly. Over here look at the Yaradua families and some of the people in offices today, their families held one major office or the other in years past.

What we should be looking out for is the individual’s pedigree to deliver. That’s why Mascot himself ought to have rebelled long ago and taken a radical step like he just did and move away from his family shadow. In great essence, the young dynamic Mascot is paying the price of coming from a privileged family. So, no matter what he has to offer no one wants to listen to him. But this coming election, he has the opportunity to change that narrative as he has finally stepped out as an independent man of his own.

Look at the Alvan Ikeoku family from Arochukwu in Abia State, there was a time the father and son contested an election against each other. Look at the Shagari family they are always on the ballot. Look at BB Apaugo family they are always running and opposing each other and no one ever used BB Apaugo to judge his children because there’s always that clear opposition within.

One of the greatest undoing of Mascot over the years was that inability to rebel, people hardly see him for who he is. As a Chief of Staff to the former governor T.A.Orji Mascot was attentive to duty, you never see any behaviour of ‘do you know who l am’ from him. Being naturally a nice, easy going and understanding person, those characteristics were reflected in his service to the people.

What people are afraid of about him is that fear of him being remote-controlled by his family if he enters office. Our people are afraid of a government of godfatherism, thus, he needs to step out and step up his act and show the people that he has a strong and independent mind of his own.

Taking his family by surprise and moving into another party is the first step toward that. He needs to do more.