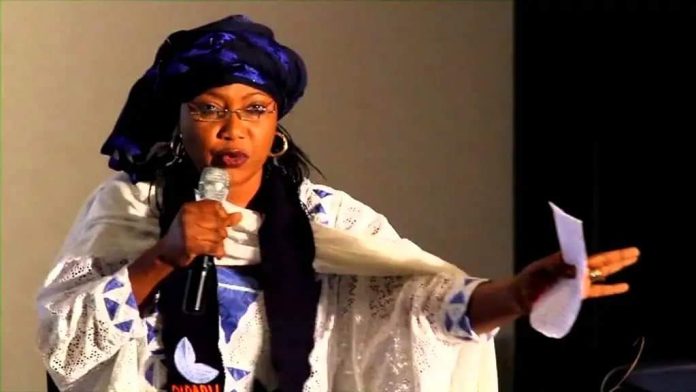 Naja’atu Muhammad, the former campaign director of Bola Tinubu, candidate of the All Progressives Congress (APC), has declared her support for Atiku Abubakar, the flag bearer of the Peoples Democratic Party (PDP).

Ms Muhammad, whose resignation letter from the APC Presidential Campaign Council (PCC) surfaced online last week, said recent developments in the political and democratic space have made it impossible for her to continue participating in party politics.

But in an interview with The Whistler, the Kano politician opted for the former vice president, claiming the letter was a lesser evil compared to the former Lagos governor whom she said demonstrated clear symptoms of dementia when she visited him for a private meeting in London.

“Asiwaju that I sat with for two hours, he slept most of the time, it was Bisi Akande that I was really talking to,” Muhammad claimed. “Most importantly he (Tinubu) is not only physically unfit, he is mentally unfit, whether we want it or not, this is the truth. It’s not that I hate him, I respect him because I have heard of one or two people that he assisted which is good.

“But when you talk of leadership of over two hundred million people you know that if you remove tribal sentiments, you know that he is incapable, those that will rule are those around him. This is the reality. He is mentally deranged – I said it!

“I sat with him for two hours in London, when you talk of green, he will give you an answer of red, he can’t even decipher, he has very serious dementia, I believe he has Alzheimer’s because he cannot even hold a cup of tea.

“If you remove tribal sentiment, if you remove the Lagos/Ibadan press, if Tinubu were not a Yoruba man, he will not dare contest election because they will crucify him, but people are all there to defend him because he is Yoruba, it’s egbe omo Oduduwa over everything else.”

Downplaying the chances of Rabiu Kwankwaso of the New Nigeria Peoples Party (NNPP) and Peter Obi, the Labour Party (LP) candidate, who is popular among the youths, in winning the February 25 exercise, the politician said the duo do not have the widespread coverage across the country to win the election.

She also disclosed that the refusal of the LP candidate to condemn secessionist activities in his domain also informed her decision to opt for Mr Atiku.

“I’ve been talking to Kwankwaso, I know he is handicapped, I have not sat with Obi, but Obi is not accepted in the north anyway,” she opined.

“Someone was saying between Tinubu and Atiku is like the devil and the deep sea, I said that is true but I rather jump into the deep sea.

“What I’m saying is, if I have to choose between the devil and the deep sea, I’ll go for the deep sea, I will support Atiku, because over and above everything else, I follow my conscience. I’m not doing it for myself, I’m doing it for God and for my country,” she stated.