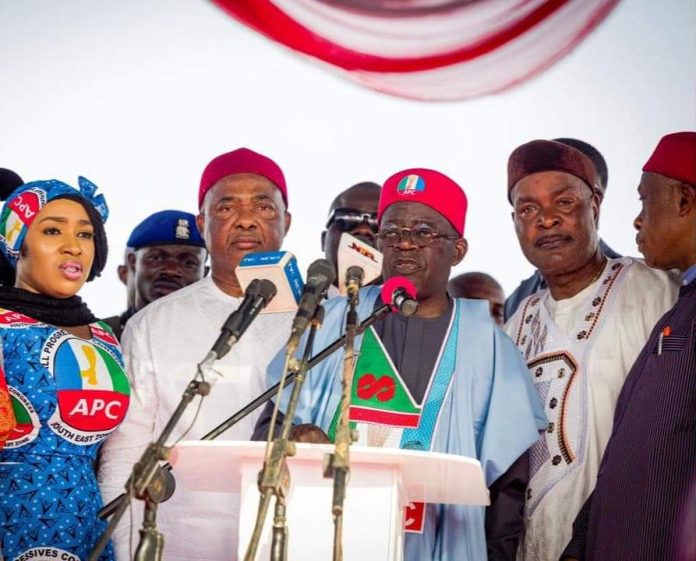 Bola Tinubu, the presidential candidate of the All Progressives Congress (APC) says the Igbo speaking people in the country owe him votes as this year’s presidential election draws near.

Mr Tinubu exhibited the sense of entitlement on Tuesday when his campaign train landed in Abia, one of the states in the South-East geo-political zone.

The former Lagos governor also took a swipe at his rival who is the flag bearer of the opposition Labour Party (LP) Peter Obi, describing him as his tenant whom he will floor at the polls.

He said despite the claim of Mr Obi of transforming the Igbo speaking state, the former Anambra governor left his domain to reside in Lagos, the former country’s capital which he presided over its affairs from 1999 to 2007.

“You see Lagos how e be? Go there now. You will not want to come back,” the APC candidate said. “The man wey won run in Labour Party (Peter Obi), he no fit stay in Anambra.

“He moved to Lagos. And I am his landlord. I no de worry am. I just dey wait for the day I beat am for election.”

He charged the people of the state to elect him as president while doing same to candidates of the ruling party during the general elections.

The septuagenarian, who believes it is his turn to preside over the country notwithstanding his frail physical and mental conditions, will slug it out with other top rivals, including Mr Obi; Atiku Abubakar of the Peoples Democratic Party (PDP) and Rabiu Kwankwaso of the New Nigeria Peoples Party (NNPP) during the February 25 exercise.