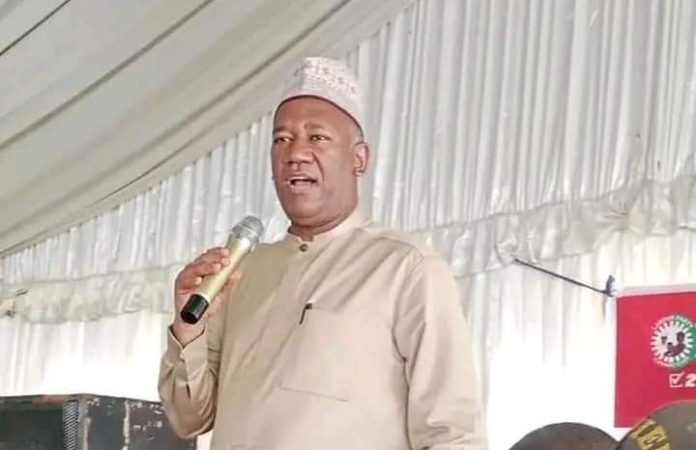 Yusuf Datti Baba-Ahmed, the vice presidential candidate of the Labour Party (LP) says the two major political parties in the country are fighting to come second and third in next year’s general election.

Mr Baba-Ahmed, who stated this on Thursday during a press conference in Abuja, accused the All Progressive Congress (APC) and the Peoples Democratic Party (PDP) of peddling falsehoods as campaign strategies.

The former Kaduna North senator lamented that despite the noble objective of the recently signed Peace Accord by all political parties ahead of the 2023 general elections, the APC and the PDP which he described as “erstwhile major political parties” have resorted to the adoption of falsehoods against Peter Obi, the LP flag-bearer, including the false narratives recently being spread nationwide that Obi is against the production of oil in the northern region.

“In the squabble for second and third positions, some erstwhile major political parties appear to have crossed the boundaries of decency to transgress our peaceful activities and our focus on political schedules,” the politician alleged.

“On the 29th September 2022, an eminent group of statesmen under the aegis of the National Peace Committee, brought together all the Presidential Candidates to sign a Peace Accord, which represents an agreed code of conduct for the 2023 Presidential Elections.

“Recently, for example there was a false narrative been spread nationwide that Mr Peter Obi is against the production of oil in the north; nothing could be farther from the truth.

“Peter Obi has repeatedly stated at various local and international fora that the greatest physical asset of Nigeria is the vast rich land in the North, and declared his commitment as a visionary transformative leader to exploit same for the overwhelming benefit of the Nigerian people. To the architect of ‘’consumption to production’, oil in the North means more revenue for development, more jobs and opportunities.

“Earlier attempts to discredit the Obi’s candidacy through fabricated allegations of demolition of mosques, internal deportation of Northerners, issuance of ID cards to northerners, and ethic hostilities were all conclusively proven to be false and without basis.

“As if those were not enough, just a few days ago, the presidential candidate of the APC speaking in Delta State, and referring to our presidential candidate, said that it was a disgrace to mention his name. While our candidate is quite comfortable with not being mentioned, it is most unpresidential, indecorous and disrespectful from the candidate who claims his turn at Nigerian Presidency.

“APCs strategy against Peter Obi now appears very clearly centered on promoting falsehood, in addition to empty and derogatory personal attacks, and of course this is because they can find no contentious points of negativity to push.

“Little wonder that their Vice Presidential candidate has consistently put to shame the noble heritage of the great Bornu Empire, in his unguarded and uncultured public pronouncements, which expose his intellectual laziness and discomfort with empirical facts and arguments. Regular insults which have now become his trademark, have not spared the current Vice President whom he directed to go and sell ice cream, nor the former Vice President whom he described as a pure water seller, a noble venture which serves the populace better than a certain white substance.

“It is pertinent to recall how Mr. Shettima at a recent public event belittled Atiku Abubakar’s educational qualification as well as the modest lifestyle of Peter Obi. Clearly Mr. Shettima is out of touch with reality and cannot understand that people like Peter Obi who have reached the heights in business and material achievement have long transcended the need for ostentatious display of wealth.

“We congratulate Mr. Shettima on having improved his dressing, but equally remind him that he needs to improve on his public composure and discipline in communication. Shettima is called upon to speak kindly and more responsibly about all personalities if only to uphold long-established standards.

“We cannot also forget his disposition and uncooperative attitude when hundreds of schoolgirls were abducted under his watch as governor in 2014 where he did little to secure them in the first place or facilitate their rapid rescue; a Governor under who education was sustained as ‘forbidden’. The circumstances of his emergence as a Candidate in 2011 leaves yet many questions unanswered.

“Others are not left out; It is important to underline that Oaths of office do not expire with tenure, and hence the comment that the Northern electorate do not need a Yoruba or Igbo leader is greatly at variance with the oaths of office taken in 1999 and 2003 respectively, and the Peace Accord of 2022. This is to call upon the owner of the statement to respectfully retract same in order to be readmitted to the honour list of esteemed presidential candidates. Truth of the matter is that every Nigerian from anywhere needs a credible and competent President. Simple.

“Going beyond the comments of candidates, it is important to further highlight, some other developments of concern to us in the Labour Party. We are concerned about the fate of areas designated by security agencies as ungoverned spaces which contain legally delineated polling units. It is necessary for INEC to clearly address the nation on how it intends to handle the challenge of conducting elections in these areas.

“Over the past few months we have witnessed various attacks on Labour Party Offices, meetings and our members in parts of the country, and even INEC offices have not been spared. Just a couple of days ago, Mrs. Victoria Chintex, our vibrant and able Women Leader in Kaura LG of Kaduna State was assassinated while members of her family escaped with injuries.

“Senseless killings have gone on for too long. We call on government within time left to at least make attempts at fulfilling its 2015 promise of securing lives and property, while serving justice to the killers. Kindly therefore join me in observing a moment of silence in remembrance of her and indeed all victims all over the country.

“We are alarmed by the reported arrest, battery, and detention of Aminu Mohammed, a final-year student of the Federal University Dutse, over an alleged social media post, about the person of the First Lady. While as we have presented earlier in this address, we will never as a party condone indecorous speech and disrespect to elders, we wish to remind the Buhari State House that they rode to power on the personal denigration of their opponents and empty promises without slightest clues of good governance. Individuals must be free to express themselves freely and any infraction of law be pursued as civil matter and not through high-handed abuse of power. This is not 1984. We lend our voice to the genuine calls for his immediate release.

“We have so far endured the afore-mentioned and have taken remedial actions where necessary and where not we simply ignored. Civility and respect of law must not be read by misguided elements as signs of weakness on our part. It is not too late to adopt our style of strictly campaigning on relevant practical national issues while respecting individuals, and institutions. Any actions to the contrary the people responsible must know they will be held accountable in the decent manner we have presented our issues here today, and in the ways of the law.

“2023 Elections will be different as Nigerian Electorate are increasingly becoming aware of the dangers of ethnic and religious politics; a fact that causing anxiety, frustration, and desperation with political actors of the old order. Consequently these attacks against us are only likely to increase; we must call on authorities to live up to constitutional responsibilities, and on the general public to regard lies, misinformation, and propaganda for exactly what they are.

“The ObiDient Movement under Labour Party will continue to remain faithful to founding principles and the Signed Peace Accord and we equally invite all stake-holders to emulate. The next few weeks will see an escalation of election activity. I urge all who have not yet collected their PVCs, to do so without delay, and to follow through, to identify their polling booths, vote, and defend their votes.

“I wish to sincerely thank the vast majority of our people, the Youth and elderly alike, from all across the nation, who have continued not just to embrace Peter Obi, my humble self, and our great party, but who are daily investing their time and resources in making sure that other Nigerians share in their conviction and imbibe the urgency of positive action in the coming elections.”